What do IPU permanent committees do?

Our four Standing Committees have a special role which is defined in our statutes. Each committee has a specific area of work—Peace and International Security; Sustainable Development, Finance and Trade; Democracy and Human Rights; and United Nations Affairs.  A key part of their work is the preparation and adoption of resolutions which go on to be adopted by our twice-yearly Assemblies, and become the IPU’s political statements. The Standing Committees meet at each Assembly. All IPU Members can participate in their work, which includes discussing other subjects as well as preparing the resolutions.

How and when can IPU Members submit proposals for the agenda?
Proposals normally need to be made at least 12 months in advance in the case of subject items for a resolution, or at least 6 months for other activities or items. They should be submitted to the IPU Secretariat no later than 15 days before the opening of the Assembly at which the subject is due to be discussed. They can be sent by e-mail to postbox@ipu.org or by fax to +41 22 919 41 60. The Bureau reviews the proposals and makes recommendations for the Committee to make a final decision.

What is the difference between a “subject item” and other items on the agenda?

A “subject item” is the topic of a future resolution. It will be debated and drafted over a period of 12 months, leading to the adoption of a resolution. Other items on the agenda will usually be debated only once and will not lead to a resolution, but may produce other results such as reports.

How are the Committees’ agendas decided?

All Members can make proposals for the agenda. An 18-member Bureau studies them and makes recommendations to the relevant Committee. The respective Committee as a whole takes the final decision. The agenda is normally decided 12 months in advance.

What role does the President of a Committee play?

Each President presides over the proceedings of his or her respective Committee and decides on all matters not covered by the rules. He or she also represents the Committee concerned between sessions. Each Committee elects a President from among the members of its Bureau.

What role does a Bureau play?

A Bureau prepares and reviews implementation of the workplan of its respective Committee and makes proposals for the Committee’s agenda at future Assemblies. It normally meets at both annual sessions of the Assembly. It is composed of 18 members, with three seats for each of our six geopolitical groups. Each geopolitical group must have no more than two representatives of the same sex.

How is a Bureau elected?

Bureau members are nominated by the geopolitical groups and elected by the respective Committee.  They serve for two years and can be re-elected for a second two-year term. They can be elected as President or Vice-President.

If Bureau members are unable to participate in a session, can they be replaced?

Yes. The members may be replaced by other duly mandated representatives from the same IPU Members for that session only.

What else do Committees do?

The Committees have a broad mandate. Our rules say that they can, among other things, commission research, discuss reports on good practice, review the impact of resolutions, organize field missions and hold hearings on relevant subjects. Proposals for the work plan are normally made by the Bureau. It is up to each Committee to decide what it wants to do. 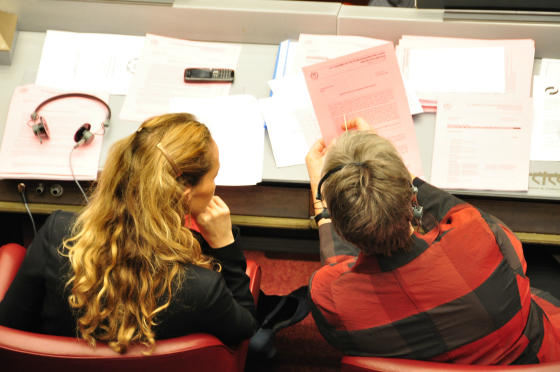