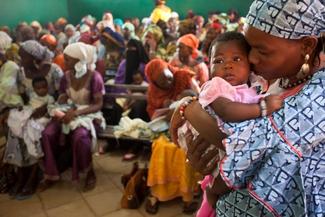 As part of the implementation of Sustainable Development Goal (SDG) 5 on gender equality, the National Assembly of Mali and the IPU organized a workshop on improving women’s representation in parliament from 27 to 28 February 2019 in Bamako.

The workshop aimed to support the Parliament in monitoring the government’s commitments to gender equality; encourage more women to enter politics; work with political parties to encourage women to stand for political office by, for example, giving women access to financing; and raise awareness about the importance of women’s representation among parliamentarians, the media, and the general public.

Malian women, who make up more than half the population, have been under-represented in decision-making posts. Their political participation is often hindered by poverty and illiteracy. However, as part of the country’s commitment to implementing the SDGs, the Malian government and Parliament have put in place measures for women’s empowerment to improve maternal and child health, get more girls into education, combat violence against women and increase women’s representation in parliament. In 2015, a law was passed to help increase the number of women MPs, which resulted in an increase from 9 per cent in 2009 to nearly 27 per cent in 2016. This is being taken further by a law on gender parity, which will come into effect at the next elections. The law states that no list will be accepted if it includes over 70 per cent of one gender.

The workshop follows on from earlier workshops co-organized by the IPU and the Malian National Assembly on gender equality and SDGs in 2017, and a self-assessment on its readiness to implement the SDGs in 2018.