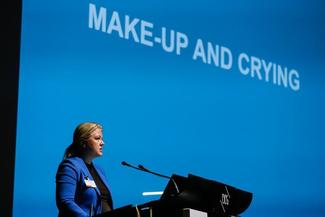 Former Swedish MP Ulrika Karlsson at the launch of the IPU/PACE report in October. ©IPU/P. Albouy

On International Day for the Elimination of Violence against Women, we call on parliaments to build on the momentum of the #MeToo movement to denounce the violence happening in the corridors of legislative power.

Parliaments are the very essence of democratic governance - government for the people by the people. But in the male-dominated world of parliamentary politics, sexual harassment and abuse are rife. Today, with more women MPs exposing the extent of the problem, the entire parliamentary community needs to step up and end gender-based violence now in our workplace and beyond.

As women parliamentarians, we have heard countless stories from female colleagues of violence, abuse and harassment. We are alarmed and shaken by how endemic this behavior is - even in the most developed democracies.

A recently published report  by the IPU and PACE confirms that in Europe’s parliaments sexual misconduct and harassment are pervasive and committed with apparent impunity.

Young women MPs and women active in the fight against gender inequality and violence are often singled out for attack.

Social media is a mixed blessing when it comes to threats of violence and harassment. Many survivors are using social media to speak up, share their experience, offer support and look for ways to prevent it. But the IPU and PACE survey shows that social media is also the main channel for threats, with 58 per cent of women in parliament saying they have been the target of online sexist attacks on social networks. One interviewee described how she was harassed online, “I got an anonymous message saying, ‘We’re going to kill you. First we’re going to beat up your children. Then you will be raped, killed. Your husband and your children, we’ll get you all. You can hire bodyguards, but we know where you live. We’ll get you all.’”

Who is committing these crimes? According to the IPU and PACE study, the perpetrators of sexual harassment against women MPs, were, in 76 per cent of cases, male parliamentarian colleagues, both from their own political party and from parties opposed to their own. In 34 per cent of cases, the incidents actually occurred on parliamentary premises!

What will it take to end harassment, sexism and violence against women in parliaments? First the heads of parliamentary institutions worldwide must recognize the problem and its prevalence, say loudly and clearly that it will not be tolerated, and commit to deal with it seriously. Secondly, robust grievance procedures in which victims of sexual misconduct can have confidence must be put in place with a range of effective sanctions against the perpetrators. And lastly, MPs must take part in mandatory prevention programmes to promote gender-sensitive parliaments.

We need to be the “shining example” by confronting this issue head-on, rather than offering empty words deploring the situation but doing little to change mindsets, including among our colleagues.

Parliaments should be places of unity, trust, safety and respect. They represent democracy’s ultimate aspiration of inclusive and participatory politics for every citizen. If the fundamental human rights of women are being constantly violated in parliamentary chambers and workplaces then we, MPs worldwide, have failed our constituents – young and old, and ultimately have made a mockery of the basic tenets of democracy.

There can be no place for sexist behaviour, harassment and gender-based violence in parliament. All national parliaments are invited to join our hashtag initiative #NotInMyParliament and take action.