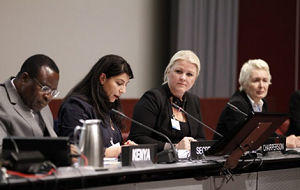 The meeting called for a series of steps to ensure that Resolution 1325 takes effect in every country. ©IPU/Pierre Albouy

MPs have called for fresh action to help ensure that UN Security Council resolution 1325 on women, peace and security is more widely implemented and respected as they marked its 15th anniversary. Their recommendations, aimed at boosting parliamentary involvement in promoting the women, peace and security agenda, include speeding up the adoption of National Action Plans on 1325; increasing the participation and leadership of women in parliaments, particularly in work relating to peace and security; and ensuring that 15 per cent of peace and security funding is dedicated to gender-related issues such as boosting women’s political participation and protecting women and girls from violence. The recommendations followed a discussion by IPU’s Meeting of Women MPs on gender equality as an indispensable element of sustainable peace and security. The Meeting of Women MPs, a permanent fixture of IPU Assemblies, works to advance gender equality and women’s rights. This includes promoting the UN Convention on the Elimination of All Forms of Discrimination against Women (CEDAW) and working alongside the CEDAW Committee.

MPs from 138 countries will convene next week in Geneva to determine among other issues specific ways in which parliaments can respond effectively to serious human rights violations and their underlying causes, including human rights situations likely to lead to conflict.
Read more
Profiles