Much of our work centres on building capacity in parliaments, often through support projects. Through these projects, we provide advice, guidance and technical support to build parliaments’ capacity for holding governments to account, strengthen their budget and audit capacity, enhance transparency and combat corruption. We pay particular attention to building parliamentary capacity in the areas of human rights and gender equality. We place a premium on accompanying parliaments in countries emerging from conflict and/or in transition towards democracy. We promote dialogue and inclusiveness so as to defuse tensions in the event of internal crises.

Recent years have witnessed an exceptional increase in the demand for the IPU’s capacity-building assistance with an unprecedented number of activities being conducted. This trend is expected to continue, as parliaments seek help in facing the many challenges arising from recent upheavals globally and nationally. IPU member parliaments have supported these activities by providing expertise and advisory services, and by hosting study visits. The wealth and richness of the collective expertise of its members is paramount in our capacity-building work.

Afghanistan: Since December 2014, we collaborated with UNDP on a project, “Institutional and Capacity Support to the Parliament of Afghanistan”. As part of the project, we facilitated the Parliament’s self-assessment of secretariat departments in public relations and information; archives, library and research; support to committees; plenary session management; ICT; finance, human resources and audit; and international relations management. Initial recommendations of the self-assessments called for more autonomy and independence for parliament in its day-to-day operations. In this context, the IPU, UNDP with the Parliament of New Zealand, and others helped with drafting a parliamentary service act.

Djibouti: We are preparing to send a team of parliamentary experts to undertake an exploratory needs assessment mission and, at the same time, undertake a concrete activity of support that the parliament sees as a priority. The mission will also use this as an opportunity to meet with other organizations supporting the parliament.

Egypt: We partnered with the Egyptian Government just after the revolution to help build the new Parliament. In March 2014, after the referendum on a new Constitution, the IPU and the Egyptian authorities signed an agreement to develop a fully functioning and representative parliament. We helped in upgrading parliamentary support services through the development of human resources. Activities in 2015 included the delivery of induction courses for newly elected members after the elections. After a full year of planning for a larger-scale project, further support is foreseen in 2017.

Equatorial Guinea: Since 2003, we have been helping the parliament to enhance the capacity and awareness of newly elected members on their role and responsibilities as parliamentarians and on transparency, with training for a team of verbatim reporters. A needs assessment identified four areas where the parliament needed further assistance: legal framework, working methods, human resources and work of the commissions. Our first activities, relating to working methods, will be targeting the modernization of the parliament.

Guinea-Bissau:  Since 2010, we have been providing support to Guinea Bissau—in partnership with UNDP—mostly by helping to enhance the capacity and awareness of newly elected MPs on their role and responsibilities as parliamentarians. Other activities included helping to strengthen the functioning of the People's National Assembly; drafting of user friendly manuals for distribution to members and staff on oversight and representation; and assessing transcription needs with a view to reorganizing the transcriptions service. Following the 2012 coup and the 2014 elections, the IPU and UNDP were asked to revive their programme, and we are closely monitoring the situation.

Republic of Korea: According to analysts, Korea's current presidential system, introduced in 1987, has resulted in presidential terms being conducted in an imperial style, which has contributed to endless political and social conflict. As a result, there have been intensifying calls to change the system. We organized the provision of advisory services to the Secretary General of the National Assembly to provide comparative information on constitutional reform.

Myanmar: Since 2012, we have been collaborating with UNDP to support the Union Assembly of Myanmar through a comprehensive Parliamentary Support Programme. The support has, among other things, seen improved capacity of MPs and staff to perform their functions in an effective, transparent and inclusive way; enhanced institutional capacity of parliamentary committees; and improved capacity of the parliament to effectively communicate for internal and external purposes.

The wide range of orientation and induction programmes for MPs has resulted in improved knowledge and understanding of their functions and roles. The next stage of support will involve strengthening the processes and procedures of the plenary and committees. Watch the video.

Pakistan: In Pakistan, we have been supporting the parliament since 2005 through two comprehensive support projects in partnership with UNDP.

Palestine: We have been supporting the Palestinian Legislative Council (PLC) since 2011. Initially, between 2011 and 2013, support was provided in partnership with UNDP through the implementation of a comprehensive project of support.  Since 2014, we have continued to help the parliament in areas identified by the parliament as needing priority support. We delivered several activities, including training in public administration, protocol and etiquette. We also supported the secretariat in developing a communication plan.

Sri Lanka: We helped the Library of the Sri Lankan Parliament build a digital repository of its comprehensive collection of valuable documents for use by Members of Parliament, parliamentary staff and the general public of Sri Lanka. Ongoing support through training of ICT/Library staff continues. We are also providing support to the recently established select Committee on the UN 2030 Agenda for Sustainable Development Goals (SDGs).

Tunisia: We organized, together with UNDP, induction courses for newly elected members. In 2015, two sessions took place: one on democratic parliament standards and another on the legislative function. An activity focusing on parliamentary administration management models and the oversight function of the Parliament took place in June 2016. We continue the collaboration with UNDP in support of the parliament.

Zambia: In 2016, we helped facilitate the National Assembly’s building of a digital repository for its library to improve information management and sharing in the parliament. The National Assembly has since created a steering committee to guide the project by making decisions and setting goals. We continue to provide advisory and expert counsel to the committee. 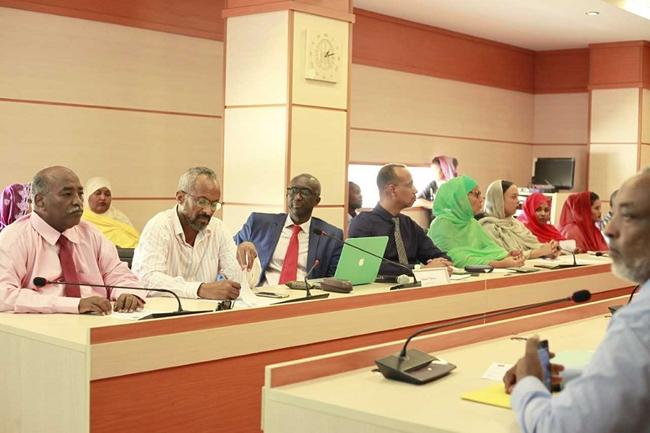 We pay particular attention to building parliamentary capacity in the areas of human rights and gender equality. Photo: ©Reuters/Joseph Penney