Reaffirming the Inter-Parliamentary Union's commitment to peace and development and convinced that the strengthening of the democratisation process and representative institutions will greatly contribute to attaining this goal,

Reaffirming also the calling and commitment of the Inter-Parliamentary Union to promoting democracy and the establishment of pluralistic systems of representative government in the world, and wishing to strengthen its sustained and multiform action in this field,

Recalling that each State has the sovereign right, freely to choose and develop, in accordance with the will of its people, its own political, social, economic and cultural systems without interference by other States in strict conformity with the United Nations Charter,

Recalling further the Declaration on Criteria for Free and Fair Elections which it adopted in March 1994 and in which it confirmed that in any State the authority of the government can derive only from the will of the people as expressed in genuine, free and fair elections,

Referring to the Agenda for Democratisation presented on 20 December 1996 by the UN Secretary-General to the 51st session of the United Nations General Assembly,

Adopts the following Universal Declaration on Democracy and urges Governments and Parliaments throughout the world to be guided by its content:

FIRST PART - THE PRINCIPLES OF DEMOCRACY

1. Democracy is a universally recognised ideal as well as a goal, which is based on common values shared by peoples throughout the world community irrespective of cultural, political, social and economic differences. It is thus a basic right of citizenship to be exercised under conditions of freedom, equality, transparency and responsibility, with due respect for the plurality of views, and in the interest of the polity.

2. Democracy is both an ideal to be pursued and a mode of government to be applied according to modalities which reflect the diversity of experiences and cultural particularities without derogating from internationally recognised principles, norms and standards. It is thus a constantly perfected and always perfectible state or condition whose progress will depend upon a variety of political, social, economic, and cultural factors.

3. As an ideal, democracy aims essentially to preserve and promote the dignity and fundamental rights of the individual, to achieve social justice, foster the economic and social development of the community, strengthen the cohesion of society and enhance national tranquillity, as well as to create a climate that is favourable for international peace. As a form of government, democracy is the best way of achieving these objectives; it is also the only political system that has the capacity for self-correction.

4. The achievement of democracy presupposes a genuine partnership between men and women in the conduct of the affairs of society in which they work in equality and complementarity, drawing mutual enrichment from their differences.

5. A state of democracy ensures that the processes by which power is acceded to, wielded and alternates allow for free political competition and are the product of open, free and non-discriminatory participation by the people, exercised in accordance with the rule of law, in both letter and spirit.

6. Democracy is inseparable from the rights set forth in the international instruments recalled in the preamble. These rights must therefore be applied effectively and their proper exercise must be matched with individual and collective responsibilities.

7. Democracy is founded on the primacy of the law and the exercise of human rights. In a democratic State, no one is above the law and all are equal before the law.

8. Peace and economic, social and cultural development are both conditions for and fruits of democracy. There is thus interdependence between peace, development, respect for and observance of the rule of law and human rights.

SECOND PART - THE ELEMENTS AND EXERCISE OF DEMOCRATIC GOVERNMENT

9. Democracy is based on the existence of well-structured and well-functioning institutions, as well as on a body of standards and rules and on the will of society as a whole, fully conversant with its rights and responsibilities.

10. It is for democratic institutions to mediate tensions and maintain equilibrium between the competing claims of diversity and uniformity, individuality and collectivity, in order to enhance social cohesion and solidarity.

11. Democracy is founded on the right of everyone to take part in the management of public affairs; it therefore requires the existence of representative institutions at all levels and, in particular, a Parliament in which all components of society are represented and which has the requisite powers and means to express the will of the people by legislating and overseeing government action.

12. The key element in the exercise of democracy is the holding of free and fair elections at regular intervals enabling the people's will to be expressed. These elections must be held on the basis of universal, equal and secret suffrage so that all voters can choose their representatives in conditions of equality, openness and transparency that stimulate political competition. To that end, civil and political rights are essential, and more particularly among them, the rights to vote and to be elected, the rights to freedom of expression and assembly, access to information and the right to organise political parties and carry out political activities. Party organisation, activities, finances, funding and ethics must be properly regulated in an impartial manner in order to ensure the integrity of the democratic processes.

13. It is an essential function of the State to ensure the enjoyment of civil, cultural, economic, political and social rights to its citizens. Democracy thus goes hand in hand with an effective, honest and transparent government, freely chosen and accountable for its management of public affairs.

14. Public accountability, which is essential to democracy, applies to all those who hold public authority, whether elected or non-elected, and to all bodies of public authority without exception. Accountability entails a public right of access to information about the activities of government, the right to petition government and to seek redress through impartial administrative and judicial mechanisms.

15. Public life as a whole must be stamped by a sense of ethics and by transparency, and appropriate norms and procedures must be established to uphold them.

16. Individual participation in democratic processes and public life at all levels must be regulated fairly and impartially and must avoid any discrimination, as well as the risk of intimidation by State and non-State actors.

17. Judicial institutions and independent, impartial and effective oversight mechanisms are the guarantors for the rule of law on which democracy is founded. In order for these institutions and mechanisms fully to ensure respect for the rules, improve the fairness of the processes and redress injustices, there must be access by all to administrative and judicial remedies on the basis of equality as well as respect for administrative and judicial decisions both by the organs of the State and representatives of public authority and by each member of society.

18. While the existence of an active civil society is an essential element of democracy, the capacity and willingness of individuals to participate in democratic processes and make governance choices cannot be taken for granted. It is therefore necessary to develop conditions conducive to the genuine exercise of participatory rights, while also eliminating obstacles that prevent, hinder or inhibit this exercise. It is therefore indispensable to ensure the permanent enhancement of, inter alia, equality, transparency and education and to remove obstacles such as ignorance, intolerance, apathy, the lack of genuine choices and alternatives and the absence of measures designed to redress imbalances or discrimination of a social, cultural, religious and racial nature, or for reasons of gender.

19. A sustained state of democracy thus requires a democratic climate and culture constantly nurtured and reinforced by education and other vehicles of culture and information. Hence, a democratic society must be committed to education in the broadest sense of the term, and more particularly civic education and the shaping of a responsible citizenry.

20. Democratic processes are fostered by a favourable economic environment; therefore, in its overall effort for development, society must be committed to satisfying the basic economic needs of the most disadvantaged, thus ensuring their full integration in the democratic process.

21. The state of democracy presupposes freedom of opinion and expression; this right implies freedom to hold opinions without interference and to seek, receive and impart information and ideas through any media and regardless of frontiers.

22. The institutions and processes of democracy must accommodate the participation of all people in homogeneous as well as heterogeneous societies in order to safeguard diversity, pluralism and the right to be different in a climate of tolerance.

23. Democratic institutions and processes must also foster decentralised local and regional government and administration, which is a right and a necessity, and which makes it possible to broaden the base of public participation.

24. Democracy must also be recognised as an international principle, applicable to international organisations and to States in their international relations. The principle of international democracy does not only mean equal or fair representation of States; it also extends to the economic rights and duties of States.

25. The principles of democracy must be applied to the international management of issues of global interest and the common heritage of humankind, in particular the human environment.

26. To preserve international democracy, States must ensure that their conduct conforms to international law, refrain from the use or threat of force and from any conduct that endangers or violates the sovereignty and political or territorial integrity of other States, and take steps to resolve their differences by peaceful means.

*After the Declaration was adopted, the delegation of China expressed reservations to the text. 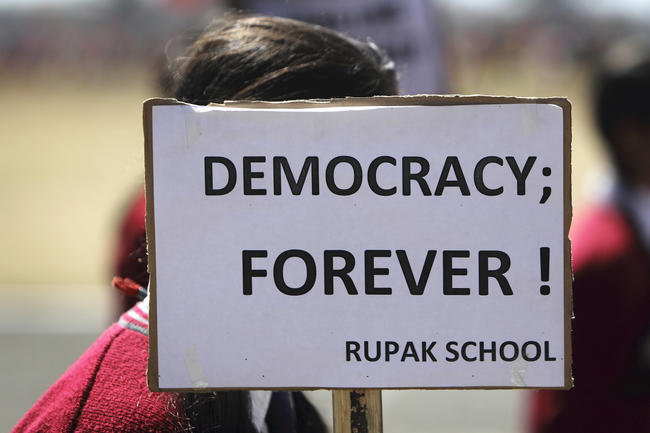