Millions of women and girls around the world suffer physical or sexual violence every year, many of them at the hands of husbands or partners. Such violence is a violation of human rights and an extreme form of gender-based discrimination. It robs women and girls of their dignity, violates their fundamental rights, damages their health, reduces their productivity and prevents them from achieving their full potential. It also has significant consequences for peace and security and a negative impact on development.

Violence against women and girls is not limited to any culture, region, country, or specific group of women. It happens in times of peace and war. It has enormous social and economic costs, as well as having a human cost to those involved.

We use every opportunity we have to raise awareness in parliaments about the extent of the problem and what MPs can do to tackle it. We have been campaigning on this issue for many years, including working to end the practice of female genital mutilation. We know that efforts to eliminate violence will need systematic and sustained action. That is why we have developed a strategy for change, outlined in our plan of action for parliaments to combat violence against women. The plan recommends adopting effective laws against violence, and—equally importantly—ensuring that they are implemented. We also help to ensure that sound institutional frameworks exist to facilitate change, and that the necessary funding is in place.

Laws and resources are only part of our approach. We also believe there must be a change in culture to end gender inequalities and the stereotyping of women, both of which are at the root of gender-based violence. To help change attitudes and social and cultural norms, we encourage relevant education for boys and girls. We build strong partnerships with men so that we can work together for change and capitalize on the untapped potential of non-violent men. Our Assemblies have passed resolutions on how parliaments can act effectively against violence, including attacks at work or home, sexual violence, female genital mutilation, human trafficking and conflicts.

In 2014, after a dynamic general debate at the 131st Assembly, IPU Members adopted a bold and forward-looking outcome document. In it, parliaments strongly condemned gender inequalities and violence against women. They committed to eliminate both by 2030.

Women in leadership positions are not immune to such violations. In 2016, the IPU launched the first global study of its kind, Sexism, harassment and violence against women parliamentarians. The issue attracted great attention and should remain a focus of our work for the years to come. This is part of our effort to make sure parliaments are models of gender sensitivity and of zero tolerance towards violence against women. The study was followed up in 2018 by a regional one focusing on parliaments in Europe.

We also support the International Day for the Elimination of Violence against Women, held every year on 25th November. 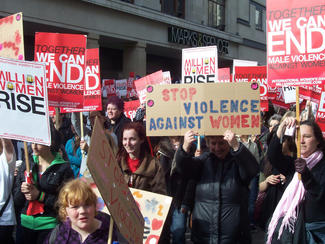 Virtual Knowledge Centre to End Violence against Women and Girls

International Day for the Elimination of Violence against Women

Special Rapporteur on violence against women, its causes and consequences

Declaration on the Elimination of Violence against Women