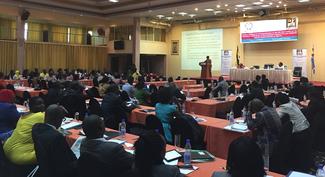 Dealing with gender inequalities in the economy and family; improving the health of women and girls; and encouraging bills by private Members to tackle sexual offences and amend discriminatory legislation: these were some of the priorities identified during a seminar on Uganda’s implementation of the Convention on the Elimination of All Forms of Discrimination against Women (CEDAW). The focus of the seminar—organized by the Parliament of Uganda and the IPU and held from 14 to 15 June—was parliament’s role in the implementation of CEDAW.

Uganda has not submitted a report to the CEDAW Committee concerning the status of its implementation of the Convention since 2010. As a result of the seminar, the Ministry of Gender committed to sending the country’s report to the Committee by the end of 2017, after consulting with Parliament.

Participants discussed issues such as gender-based violence, equality in the law, girls’ right to education, the health of women and girls, and women’s economic empowerment. They highlighted priorities, including sexual and reproductive health education, policies on women’s ownership of land, and oversight of implementation of the country’s Domestic Violence Act. Ugandan MPs also called for ratification of the Optional Protocol to CEDAW, which would enable the CEDAW Committee to receive individual complaints on breaches to the Convention.

The seminar comprised a training component and focused discussions on developing an action plan on designated priority areas. It provided a forum for an exchange of knowledge and experience between Ugandan men and women legislators, parliamentary staff, international and regional experts, civil society and other concerned national and international institutions. The seminar was led by Ms. Rebecca Kadaga, Speaker of the Uganda Parliament, with the participation of Mr. Ekwee Ethuro, Speaker of the Kenyan Senate, Mr. Phillipus Katamelo, an MP from Namibia, and Ms. Hilary Gbedemah, a CEDAW expert from Ghana.

Click here for more information on the IPU’s work on CEDAW.