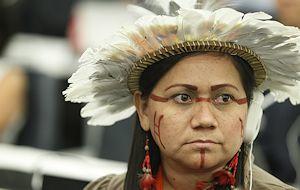 What are the challenges and opportunities in increasing the numbers of indigenous MPs? How can indigenous MPs effectively represent their constituencies? Where do parliaments fit in the broader picture of indigenous peoples’ political participation? These are questions to be addressed at a side event to the World Conference on Indigenous Peoples in New York on 22-23 September. Organized by IPU, the event on 23 September - “The Participation of Indigenous Peoples in Parliament”- will not only bring together MPs but also representatives from international organizations such as the UN and Chief Wilton Littlechild, Chairperson of the UN Expert Mechanism on the Rights of Indigenous Peoples and former Canadian MP.