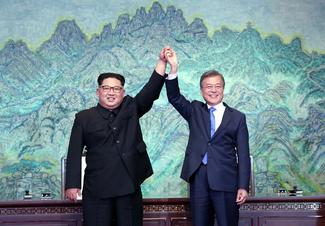 The IPU has welcomed the historic Inter-Korean Summit held on 27 April in the town of Panmunjom by both leaders, Kim Jong-un and Moon Jae-in.

Congratulating the two leaders on this giant step towards peace and reconciliation of the Korean nation, IPU President, Gabriela Cuevas, invited both sides to pursue high-level dialogue at the parliamentary level at the House of Parliaments in Geneva under IPU auspices. She said “The IPU was founded on the ideal of the peaceful resolution of conflicts through dialogue and would be only too pleased to host such talks. In a world where fear is constant, the hope and peace that the dialogue between the Democratic People´s Republic of Korea and the Republic of Korea gives us is inspiring. We welcome any effort towards building a more peaceful world”. She invited both sides to take this historic understanding one step further at the IPU Headquarters, the House of Parliaments in Geneva, a city renowned for its peace initiatives and soft diplomacy.

IPU Secretary General, Martin Chungong, also welcomed the very positive developments and said he felt “overwhelmed with emotion upon watching the two leaders hold hands and cross the demarcation line”, a gesture many would have thought impossible only a few weeks before.

The Panmunjom Declaration for Peace, Prosperity and Reunification of the Korean Peninsula adopted at the Summit commits both sides to work robustly for improved north-south relations and stronger cooperation through high-level dialogue and negotiations. The IPU salutes this bold initiative in pursuit of peace, the very foundation upon which the organization was founded nearly 130 years ago.

The IPU looks forward to a positive and equally promising outcome of the forthcoming Summit between the North Korean leader and US President Donald Trump.

MPs from 138 countries will convene next week in Geneva to determine among other issues specific ways in which parliaments can respond effectively to serious human rights violations and their underlying causes, including human rights situations likely to lead to conflict.
Read more