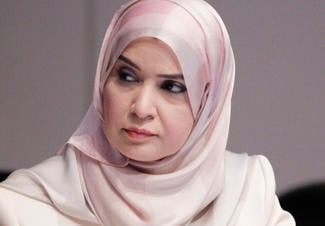 Dr Amal Abdullah Al Qubaisi was the first woman in the United Arab Emirates Parliament and the first female deputy speaker of the Federal National Council. She made history in 2013 when she chaired a House session, an occasion she described as a great honour.   This is an edited version of an iKNOW politics interview conducted in November 2013.

“We chair committees, lead discussions, organise forums, represent our country at an international level and attend conferences. We even lead delegations made up of male parliamentarians, which reflects the role of Emirati women now - they are treated equally and they are considered to be highly efficient.

“We are the first country in the Arab world in terms of closing the gender gap. We have broken the glass ceiling in many aspects - our only limit is the sky. We have great hope that we will be able to carry the aspirations of the people of the UAE, to bring out the best in them.

In what way has the investigation by US authorities impacted on your work as an MP? I was advised by my lawyers in the USA and by the Icelandic foreign affairs ministry not to travel to the USA while my
Read more
Human rights cases