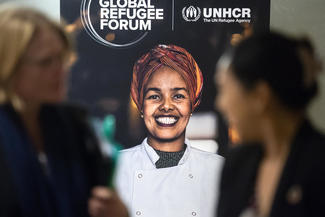 Parliamentarians from around the world were in Geneva this week for the first edition of the Global Refugee Forum organized by UNHCR, the UN Refugee Agency. The parliamentarians brought the parliamentary voice to this global gathering to take stock of the Global Compact on Refugees, the new framework for refugee management agreed at the UN General Assembly in December last year.

Ms. Meutya Viada Hafid, Chair of the Foreign Affairs Committee of the Indonesian Parliament who was representing her country and presenting its report at the Forum, conveyed a strong message that “The effective implementation of improved global refugee governance cannot work without the support of the parliament. We believe it is imperative for the parliament to work closely with the government in developing relevant policies and budget in order to improve the lives of refugees in the country.”

Also speaking at the Forum, Martin Chungong, IPU Secretary General, said “For the past 130 years, the IPU has been working for peace, democracy and the well-being of all in society- including the most vulnerable such as refugees and migrants. Parliament’s role is to represent and defend the rights of all, without exception. The Global Compact for Refugees cannot succeed without parliaments putting in place the right legislation, monitoring its impact, and holding governments to account for their actions.”

The protection and rights of refugees is a priority for the IPU. At the initiative of its Committee to promote respect for international humanitarian law, at the last Assembly in Belgrade, IPU Members committed to a series of pledges as a contribution to the Global Refugee Forum and the end statelessness campaign. This was in follow up to the IPU’s 138th Assembly in March 2018, IPU members adopted the landmark Declaration on Strengthening the Global Regime for Migrants and Refugees.

In a bid to create greater awareness and build capacity within parliaments, the IPU has also published two handbooks in partnership with the UN Refugee Agency, including Good practices in nationality laws for the prevention and reduction of statelessness and A Guide to international refugee protection and building state asylum systems.

The UN Refugee Agency estimates that an unprecedented 70.8 million people around the world have been forced to leave their homes. Among them are nearly 25.9 million refugees, over half of whom are under the age of 18. There are also millions of stateless people who have been denied a nationality and access to basic rights such as education, healthcare, employment and freedom of movement.