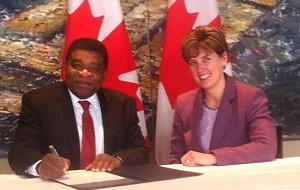 The grant from Global Affairs Canada will be used by IPU to help increase the number of women in parliament, support female MPs in their work and help to equip national assemblies to promote gender equality and respect for women's rights.

IPU Secretary General Martin Chungong, who signed the agreement, said: “Canada has always been a strong supporter of the work and values of IPU. This funding agreement is another example of its commitment to our work to promote and develop democracy and equality of opportunity.”

Mr Chungong attended a signing ceremony in Ottawa with the Minister of International Development and la Francophonie, Marie-Claude Bibeau, and later met the Foreign Affairs Minister, Stéphane Dion. The project is aiming over the next three years to offer some 500 women MPs training on how best to carry out their role and will develop an online database of research, statistics and evidence on women in politics for policymakers.  “The promotion of the equal rights of women and men in parliaments around the world improves inclusive and accountable governance,” said Minister Bibeau.