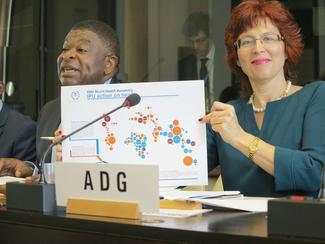 Martin Chungong of IPU and Flavia Bustreo of the WHO were delighted at the success of the first-ever WHA parliamentary meeting. ©IPU/Enico Iaia

In a historic double-first at the World Health Assembly in Geneva, IPU Secretary General Martin Chungong has delivered a speech committing IPU to mobilizing parliaments for more successful outcomes on health, and has attended the first-ever parliamentary event at the gathering.

In his Assembly address, Mr Chungong made clear IPU's commitment to working alongside the World Health Organization (WHO) to enable parliaments to contribute to universal health coverage and to ensure access to health care for people who are vulnerable and marginalized. He pointed out that health had gained increased prominence on IPU's agenda at its Assemblies for the past 10 years and said a clear link had been established between health and human rights. Mr Chungong said the partnership between IPU and the WHO had already achieved remarkable results in the area of HIV/AIDS and women's and children's health. He called on delegates to work for effective national parliaments to pass legislation, approve budgets and hold ministers accountable so that the new Sustainable Development Goals could be met.

The main contributors included Lesotho Speaker Ntlhoi Motsamai, Tanzanian MP Faustine Ndugulile, who chairs IPU’s Advisory Group on HIV/AIDS and Maternal, Newborn and Child Health, and advisory group members Pia Locatelli of Italy and Dr Habibe Millat of Bangladesh.  Ian Askew of the WHO and Betsy McCallon on behalf of the Partnership for Maternal, Newborn and Child Health also took part. IPU has thanked Bangladesh, Italy and Lesotho for sponsoring the event and all the participants for making the debut event such a success. Both WHO and IPU have expressed the commitment to making this event a permanent feature of the WHA.