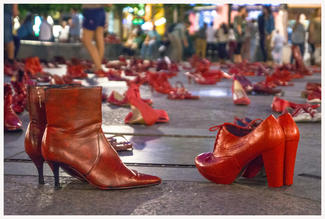 Zapatos Rojos is a public arts project to denounce violence against women. Photo by Lanpernas Laupuntozero.

A new study by the Inter-Parliamentary Union (IPU) reveals that sexism, harassment and violence against women MPs are global problems that impede gender equality and undermine the foundations of democracy.

IPU’s study is based on in-depth interviews with 55 women MPs from 39 countries covering five regions of the world. It shows troubling level of psychological, sexual and physical violence.

“This is a survey of a small percentage of women MPs, but it makes clear that the problem is much more widespread and under-reported than we realize. The parliamentary community must speak out against sexism and harassment and make clear that it cannot be tolerated as the price to be paid for women’s political involvement,” declares IPU Secretary General Martin Chungong.

The study reports that 81.8 per cent of survey participants have experienced some form of psychological violence. Among them, some 44 per cent said they had received threats of death, rape, beatings or abduction during their parliamentary terms, including threats to kidnap or kill their children.

Social media is the main channel where psychological violence is perpetrated as the experience of one European MP shows: “one time, over a period of four days, I received more than 500 threats of rape on Twitter.”  Or as one Asian parliamentarian recounts: “I receive information about my son – his age, the school he attends, his class, etc. – threatening to kidnap him.”

Sexist insults are equally frequent - 65.5 per cent of respondents declared to have been subjected to humiliating comments on repeated occasions during their mandates. Sexual harassment is described as “common practice” with 20 per cent saying they had been sexually harassed during their term and 7.3 per cent said that someone had tried to force them to have sexual relations.

Levels of physical violence are also significant - 20 per cent responded they had been slapped, pushed, struck or targeted by an object that could have injured them, and 12.7 per cent said someone had threatened to use or actually used a firearm, knife or other weapon against them.

Women MPs describe daily condescension and sexism expressed through inappropriate gestures or sounds. A European parliamentarian put it this way: “if a woman speaks loudly in parliament she is ‘shushed’ with a finger to the mouth (…). That never happens when a man speaks loudly.”

IPU’s study calls upon parliaments to define and apply robust policies and mechanisms to deter such behaviour. “Parliaments need to put their own house in order if they want to lead by example and stop discrimination and violence against women in all walks of life. The effectiveness of parliaments, progress toward equality between men and women and the vitality of democracy itself all depend on it”, said Martin Chungong.

IPU’s report concludes that this global phenomenon is creating obstacles for women MPs to carry out their work freely and securely. Its figures also clearly show the resilience of these MPs - 80 per cent of those that have been victims of sexist violence said these acts would not undermine their determination to fulfil their parliamentary mandate, nor would they prevent them from running for another term.

The report highlights that solutions exist or can be found, but it all starts by recognizing the existence of the problem, naming it and breaking the silence about it. It calls upon female and male MPs to denounce such behaviour and reject sexist violence wherever it occurs.

Interview opportunity:  Martin Chungong or Brigitte Filion will be available for interviews (English and French) on Tuesday 25 October or Wednesday 26 October from 09.30 to 10.30 (Geneva time).

PDF file of the publication: Sexism, harassment and violence against women parliamentarians