We are founded on the premise that conflicts and differences should be settled through peaceful means, such as mediation and inclusiveness. The world’s many wars bear witness to the importance of political plurality and dialogue if peace and security are to be achieved. Respecting difference is the only way to achieve unity. We believe parliaments should be at the heart of conflict prevention, mediation, reconciliation and peacemaking processes. MPs can lead the way in showing how to work together across political, cultural or religious divides, and in engaging in constructive dialogue as a means to settle disputes. However, in most countries emerging from conflict or transitioning to democracy, parliaments have few resources and little experience to deal with the scale of the task they face. Our support to these parliaments can therefore be crucial.

We back parliaments in post-conflict situations by promoting dialogue among MPs. We help parliamentarians—and parliaments as a whole—to contribute to national reconciliation by addressing the wounds of the past and building viable societies. We support parliaments in countries that are still in conflict, emerging from it, or under foreign occupation. We often work alongside the UN and its Peacebuilding Commission to achieve our goals. We believe that conflicts can be avoided through mediation and by bringing together opposing sides to resolve a dispute. We mediate through parliamentary diplomacy in some of the world’s most intractable conflict areas. These include the Middle East, where we organize dialogue among MPs from all sides, and Cyprus, where we involve those from across the divide. We also facilitate bilateral meetings at our Assemblies.

Since 2007, we have been running the Good Offices initiative, which allows us to respond quickly to requests from parliaments. We assist them in overcoming bottlenecks and obstacles in the way they operate. We contribute to the speedy normalization of parliamentary business. For example, in Burundi and the Maldives, we helped heal the political divide in heavily polarized parliaments.

Our proactive engagement with peace and security issues began in Fiji in the 1990s. We gave advice and practical support to help Fiji implement a new constitution that allowed for a more representative parliament and cabinet. This process also included a thorough reform of the standing orders of both Houses of Parliament. Our work continued in Timor-Leste in 2001–2002 where we provided technical and legal support in drafting a new constitution.

The 2011 Arab Spring uprisings in the Middle East and North Africa provided fresh challenges for our peace and reconciliation work. In 2012, our Members adopted a resolution that stressed the importance of good governance as a means of ensuring peace, and urged IPU to provide technical assistance. We have helped the Parliaments of Egypt, Libya, Oman and Tunisia to address problematic issues and to create ways for all relevant groups and parties to be drawn into decision-making and dialogue processes. We have also helped identify longer-term needs for capacity-building and advisory services in some of these countries.

Through reconciliation, we have helped countries including Kenya, Sierra Leone and Uganda to bring about major change in post-conflict situations. Our methods include hosting high-level seminars, where parliaments and MPs can agree roadmaps for reform. Other practical steps have included engaging in Côte d’Ivoire. During a conference held there, MPs agreed to take a more active and strategic role in trying to break the long cycle of violence. We also explored how they could work more closely with UN peacekeepers to achieve lasting peace.

We cater for the needs of each parliament individually, but some principles are common to all situations. These include ensuring that parliaments and MPs have smooth relations with the executive, and that opposition parties have rights and roles which are codified and respected. 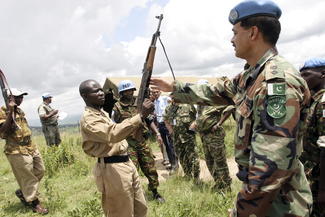