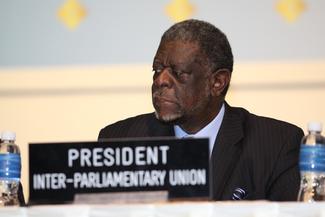 The IPU is saddened by the death of Theo-Ben Gurirab in Windhoek last Saturday. Dr. Gurirab was IPU President from 2008 to 2011. He was a world leader who brought great distinction and wisdom to the position.

Dr. Gurirab was a prominent politician in Namibia and one of the architects of the country’s independence. As SWAPO’s representative to the United Nations, he was one of the team negotiating for independence. He held several posts in the young country’s government: Minister for Foreign Affairs from 1990 to 2002, Prime Minister from 2002 to 2005, and Speaker of the National Assembly from 2005 to 2015. He also presided over the 54th session of the United Nations General Assembly.

Under his stewardship of the process leading up to the Millennium Summit of 2000 and Millennium Declaration, Heads of State and Government for the first time formally recognized the importance of interaction and engagement between the United Nations, national parliaments and the IPU. This opened the way to a strategic partnership between the UN and the IPU, aimed at bringing the voice of parliamentarians to global governance and bridging the democracy gap in international relations.

Dr. Gurirab was known as a skilful negotiator and an eloquent speaker. As IPU President, he presided over the Third World Conference of Speakers of Parliament, held in July 2010. His address to the Conference still resonates, almost a decade later: “We must be ready to ask the real, often uncomfortable, questions. Sometimes it seems we have our priorities completely wrong. When you stop for a moment and think of the staggering amounts that countries spend purchasing weapons, large and small, you may well be justified in asking yourself if much greater security would not be achieved for all of us if a portion of the same amounts were spent on the people.”

In 1998 Dr. Gurirab received an award from the World Association of Former United Nations Interns and Fellows, “in recognition of his outstanding contribution to the promotion of human rights, peace and development, especially within the context of promoting Namibia's nation-building.”

“I am deeply saddened by the passing of Theo-Ben Gurirab,” said IPU Secretary General Martin Chungong, commenting that “Namibia and the world have lost a great man, a politician without equal”.

“Dr. Gurirab was a towering figure,” said IPU President Gabriela Cuevas. “I would like to express my condolences on behalf of the world’s parliaments for the loss of one of Africa’s great liberation leaders.”

The IPU has received letters of condelences from a number of parliaments including the following:

Dr. Nurhayati Ali Assegaf, Chair of the Committee for Inter-Parliamentary Cooperation from the House of Representatives of Indonesia, wrote "Dr. Guirab's leadership had inspired many, including Indonesia, to strive for the best and work through the challenges to achieve their potential for the benefit of their countries and the world."

Mr. Demetris Syllouris, President of the House of Representatives of the Republic of Cyprus, wrote "Dr. Guirab will always be remembered for his vibrant spirit, his unwavering commitment to democracy and respect for human rights and as a champion of parliamentary diplomacy."