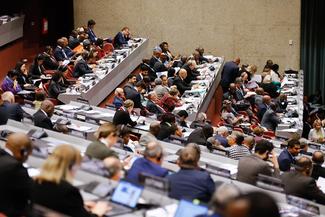 Over 1300 MPs and parliamentary staff from around the world will meet in Geneva for the 139th IPU Assembly from 14-18 October. Under the umbrella theme of science, technology and innovation, the Assembly will cover multiple subjects including fake news, sexism and harassment in parliaments, human rights, disarmament, counter-terrorism, the Sustainable Development Goals (SDGs), and migration.

The IPU has 130 years’ experience of bringing together world parliamentarians. The first IPU Assembly took place in 1889 in Paris with MPs representing 13 countries. The 139th edition next week will have delegates from nearly 130 countries including over 50 Speakers of Parliament, 40 Deputy Speakers and 700 MPs, of which 20 per cent are young MPs under 45 and 33 per cent are women.

At a time when the gap is widening between science and politics, when policies are being shaped by populism and emotion instead of evidence and facts, MPs will discuss “Parliamentary leadership in promoting peace and development in the age of innovation and technological change” in the Assembly’s General Debate. Guest speakers include Flavia Gianotti, Director General of CERN (the European Organization for Nuclear Research) and Henk Rogers, Founder and Board Chair of the Blue Planet Foundation.

Gender equality in science and technology will be one of the themes discussed at the IPU Forum of Women Parliamentarians, a topical subject following the tripartite award of the 2018 Nobel Prize for Physics to Donna Strickland, only the third woman to have ever won the prize.

The impact of technology on information, and the responsibility of parliaments to regulate fake news, will also be the subject of a panel discussion between MPs, journalists, and academics.

In addition, the Assembly will host a Knowledge Fair including exhibits by CERN, Raspberry Pi, Waterlex and the International Renewable Energy Agency (IRENA).

A year after the start of the #MeToo movement, the IPU will launch a ground-breaking report on violence against women in European parliaments, in partnership with the Parliamentary Assembly of the Council of Europe. The report corroborates an IPU study in 2016 that found that 82 per cent of women MPs had experienced some form of gender-based psychological violence. The new report will be the first in a series of IPU regional studies designed to build a global picture of sexism, harassment and violence against women in parliaments. The report also gives examples of what parliaments can do to deal with the issue.

Marking the 70th anniversary of the Universal Declaration on Human Rights, there will be a special session in partnership with the UN Office of the High Commissioner for Human Rights in the presence of prominent politicians including Anwar Ibrahim (Malaysia) and Fawzia Koofi (Afghanistan).

The IPU Committee on the Human Rights of Parliamentarians, which has been supporting both Anwar Ibrahim and Fawzia Koofi for many years, will meet to consider what actions to take to defend other persecuted MPs.

At the Assembly, the IPU will also launch a new Handbook for Parliamentarians on Freedom of Expression.

MPs on the IPU Standing Committee on Peace and International Security will discuss parliamentary action on disarmament, arms control, and non-proliferation strategies for weapons of mass destruction, conventional weapons and future weapon technologies.

In addition, the committee will look at ways of preventing sexual violence in UN peacekeeping operations.

MPs on the Standing Committee on Sustainable Development, Finance and Trade will debate the role of fair trade and investment in achieving the SDGs as well as actions to engage the private sector in implementing the SDGs, especially on renewable energy.

During the Assembly, MPs will adopt a resolution on strengthening inter-parliamentary cooperation on migration in view of the adoption of the Global Compact for Safe, Orderly and Regular Migration.

The complete programme of the 139th IPU Assembly is available here.

A closing press conference will take place on Thursday 18 October at 13.15 in Press Room 1 at the Palais des Nations.