Women account for just over 26% of parliamentarians worldwide according to the IPU’s latest figures. Despite progress made in recent years, significant obstacles continue to block their path to parity with their male counterparts. One of the biggest obstacles is sexism, harassment and gender-based violence.

IPU reports show that sexist abuse persists across all parliaments in all parts of the world. A landmark 2016 IPU survey of women parliamentarians worldwide revealed that 82% had been subject to psychological violence, whether it was sexist remarks, threats or harassment. Until effective solutions are put in place to combat this problem, it will continue to discourage women from entering politics and impede progress towards gender equality in wider society.

Understanding why sexism, harassment and violence against women in politics occur is a key first step towards solving these issues.

With patriarchal traditions and practices present in societies across the planet, men have historically dominated politics, which has had – and continues to have – various knock-on effects upon their female counterparts. One of the most pervasive is the perception that women ‘are not made for’ politics, especially at its higher levels. As a result, women parliamentarians are often subjected to gender stereotyping and sexist attitudes, aiming to discredit and undermine them, or to judge them on their physical appearance.

Such attitudes are common within parliaments and political parties themselves as well as among the general public, as IPU surveys of women parliamentarians in Africa, Europe and worldwide have revealed. These attitudes fuel sexist abuse directed at women MPs. What’s more, those who stand up for women’s rights are targeted with increased aggression, as are young women, as well as women belonging to minority groups and with disabilities, where sexism intersects with age discrimination, racism, homophobia, ableism and other prejudices.

Male domination of politics also means that women parliamentarians are more vulnerable to sexual harrassment. Since their route to higher positions is more difficult, they are often exploited or coerced by men abusing positions of power. IPU surveys have found that many women fear the repercussions of reporting harassment or violence; they don’t want to damage their careers, or the reputation of their party. In other cases, systems for reporting these crimes are ineffective.

Violence against women parliamentarians can take many forms. By far the most commonly reported in IPU surveys is psychological – typically sexist comments and remarks, expressed either verbally, online or in traditional media. The numbers are alarmingly high around the world: 67% of those surveyed in Africa, 68% in Europe and 66% in our worldwide report have experienced it. On the more extreme end are threats of death, rape, beatings or abduction, which many women in our African (42%), European (47%) and worldwide (44%) surveys also reported experiencing.

Other forms of psychological violence are less direct. This ranges from interrupting women when they raise issues and intimidating body language through to economic bias, where funds or resources are withheld from women but awarded to their male counterparts. One-third of respondents worldwide told us they had experienced this.

Sexual violence from fellow parliamentarians – including sexual harassment and other unwanted sexual acts, such as physical contact, sexual remarks or requests for sex – is another significant concern. This is staggeringly prevalent in Africa, where 40% of those surveyed in our Member Parliaments revealed they had been sexually harrassed at some point during their mandate, with 25% of European respondents and 20% worldwide confirming the same.

While the frequency of violence against women parliamentarians is alarming, a range of measures are available to combat this problem. Above all, legislation is needed to better protect and support victims, make it easier to report such violence and hold perpetrators accountable. Where laws addressing these areas already exist, they may need to be more effectively enforced, more clearly defined, and updated to reflect a fast-changing digital environment.

Internal parliamentary policies and procedures must be introduced or revised, with specific provisions for the definition and prohibition of gender-based violence, and for strong, competent and independent grievance mechanisms.

In Chile, for example, a Protocol adopted in 2019 by the Chamber of Deputies allows parliamentarians and parliamentary staff to lodge a confidential complaint, which is followed by an investigation. It’s also vital that political institutions deal out disciplinary sanctions against those who harass or abuse women, to get justice for victims and deter future violence.

Bottom-up approaches can work in tandem with these top-down measures. Training to promote workplace respect, raising awareness about different kinds of gender-based violence and promoting a culture of equality should all be considered. Actively involving men in these activities is essential to promote a zero-tolerance culture of violence in parliaments. Doing so will ally them to the cause, increasing their awareness of abusive behaviour and ensuring they provide the right support to their female colleagues.

These solutions are part of a comprehensive set of guidelines the IPU has developed to help transform parliaments into gender-sensitive institutions that deliver on women’s rights. Achieving this would bring us a step closer to gender equality in our Member Parliaments and society at large. 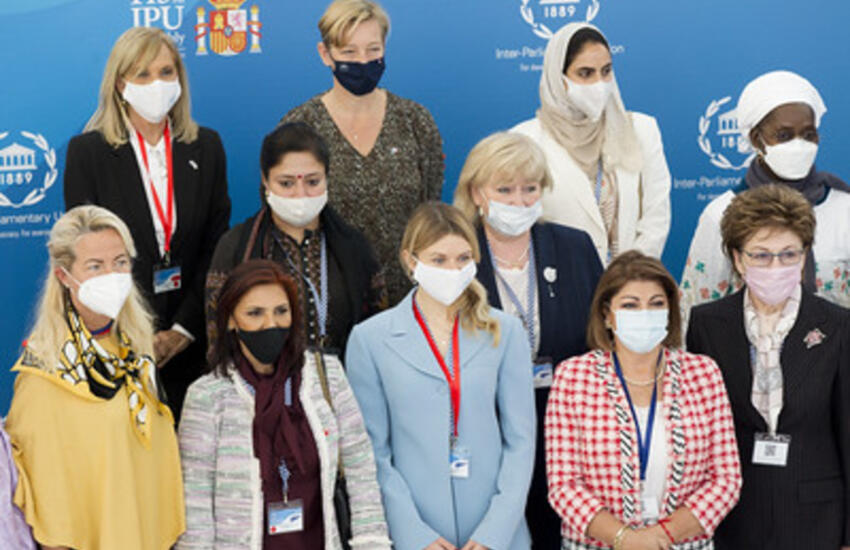 The IPU has made bold commitments and taken steps towards ensuring women and girls’ voices are heard in decision-making, and that young women are politically empowered. The IPU collaborates with strong partners such as the Generation Equality Forum (GEF), a
Read more