Working with the CEDAW Committee

Countries that have ratified the Convention must conduct internal reviews to assess how far they have implemented it. They must also submit a report to the Committee at least every four years. We work with the CEDAW Committee to encourage parliaments to participate actively in preparing and presenting State reports.

We help parliaments to engage with CEDAW and the Committee in several ways. We raise MPs’ awareness of their role in ensuring that CEDAW is fully implemented. We also make MPs aware of how they can interact with the CEDAW Committee through the State reporting procedure.

We hold parliamentary seminars and debates on issues covered by the Convention. We also encourage and support parliaments to discuss the Committee’s conclusions and incorporate its recommendations into their oversight, law-making and budget allocation work. In many countries, we have organized parliamentary seminars that facilitated national dialogue and coordination to improve implementation of the Convention.

Before sessions of the CEDAW Committee, we regularly provide information to the parliaments of countries presenting their reports at that session. We encourage parliaments to ensure that their members are included in the delegation that appears before the Committee.

CEDAW has been globally, regionally and nationally mainstreamed into our debates and activities on gender equality, human rights and development. We highlight CEDAW’s relevance to other international commitments, such as Sustainable Development Goal 5, UN Security Council resolution 1325 on Women, Peace and Security, and human rights procedures such as the universal periodic review of the UN Human Rights Council.

At each Committee session, we report on how we have enhanced the role of parliaments in overseeing proper implementation of the Convention. Our report details the level of each parliament’s involvement in the CEDAW reporting process and follow-up, based on our survey of parliaments. We also provide country-specific information on women’s participation in parliament and the executive, and on electoral quotas to increase the number of women elected as parliamentarians.

The CEDAW Committee and the IPU have developed strong institutional ties. The Committee has a permanent CEDAW-IPU Working Group, which meets with the IPU Secretariat at each Committee session. High-level meetings between the IPU’s top parliamentarians and CEDAW Committee members are also organized to enhance existing cooperation.

Committee on the Elimination of Discrimination against Women

CEDAW Committee statement on the role of parliaments

CEDAW Committee’s general recommendations on specific provisions of the Convention

Countries up for review by the CEDAW Committee 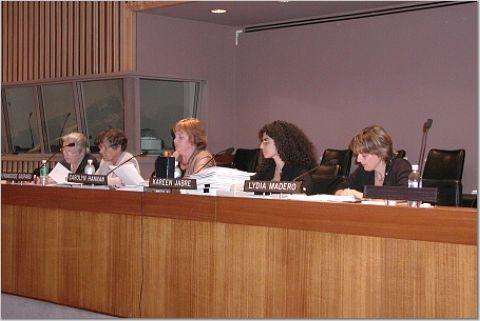 We help parliaments to engage with CEDAW and the Committee.