Key number:
10
10 years ago, the IPU adopted its landmark resolution on youth participation in the democratic process.

2020 marked the 10th anniversary of the IPU’s 2010 resolution, Youth Participation in the Democratic Process. Democracy requires parliaments to represent their citizens, and young people have the highest stakes in their countries’ futures. Most recently, the COVID-19 pandemic has exacerbated vulnerabilities for youth, including in the areas of employment, education and health care. Despite this, most parliaments have too few young MPs. Since 2010, the IPU has been collecting data on youth representation, especially the representation of young women, to raise awareness and to support advocacy for increased youth participation.

As the world celebrated the 25th anniversary of the Bei 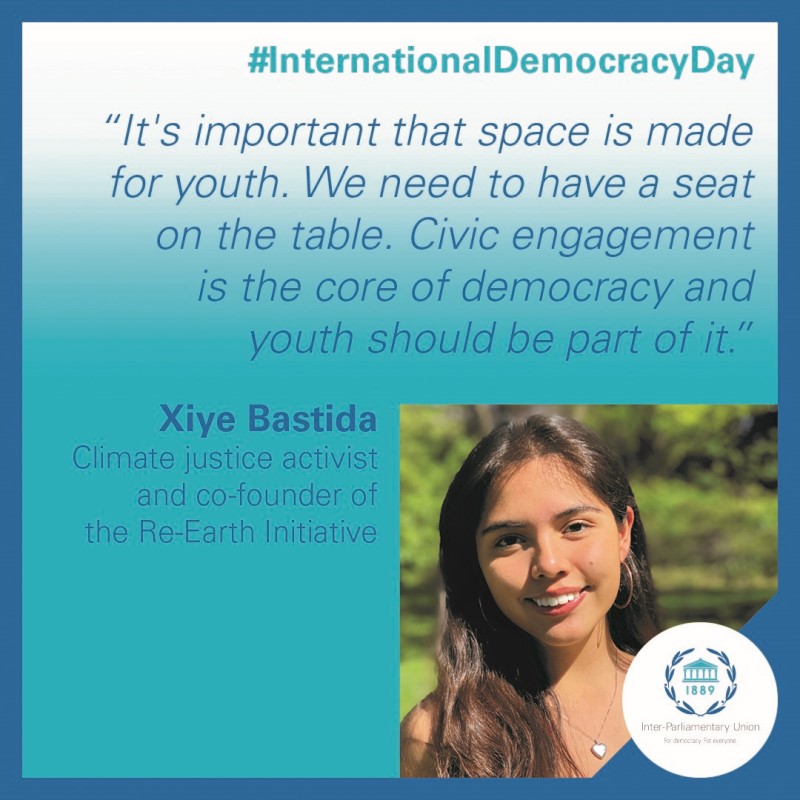 jing Declaration for gender equality, the IPU injected new energy into efforts to increase young women’s participation in politics. Together with the Office of the UN Secretary-General’s Envoy on Youth, we connected politicians with young women, including from youth and women’s movements, international organizations, UN agencies and academics. The meeting discussed barriers to young women’s political participation, as well as potential solutions.

The ensuing call to action noted that sexism, harassment, intimidation and violence, as well as funding challenges and the lack of intergenerational solidarity, prevent young women from entering public office. Solutions include more funds for young women to engage in politics, the recruitment of more young women into public service leadership, and quotas. Parliaments and political parties must be gender-sensitive and free of violence, sexual harassment and bullying. 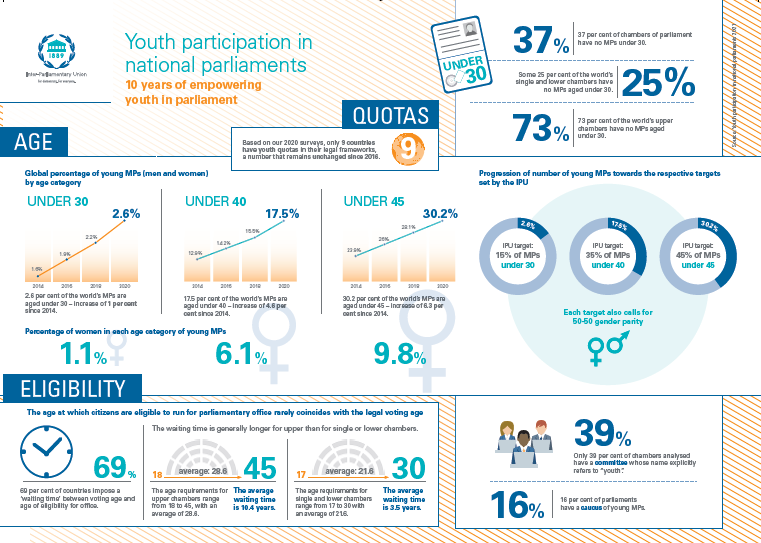 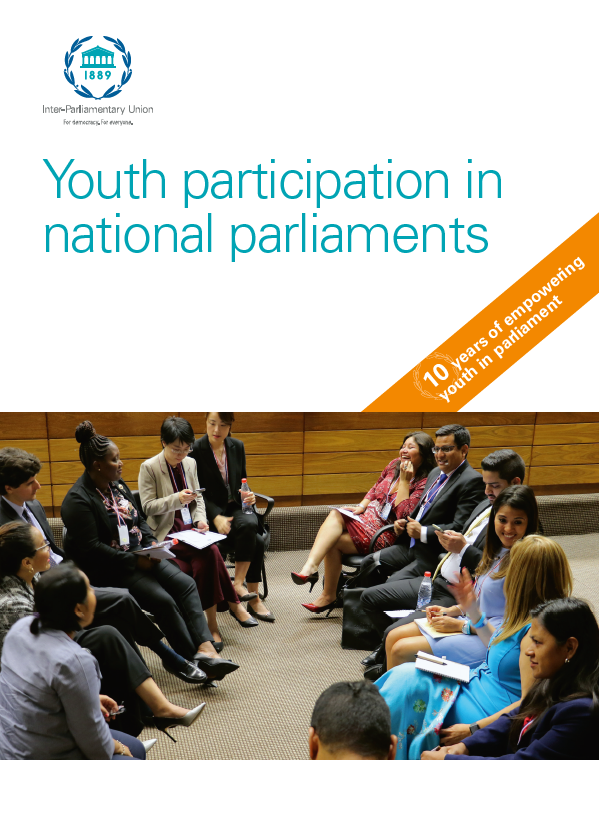 meetings to promote youth-related outcomes in 2020. Some 25 young speakers of parliament participated in the Speakers’ Conference, and 121 young MPs participated in the virtual Governing Council. Meanwhile, young MPs on the Board of the IPU’s Forum of Young Parliamentarians promoted the need for more young people in politics and to build back better from COVID-19. They did so at multiple international conferences, including those hosted by the UN, the Community of Democracies, Laureates and Leaders for Children (founded by Nobel prize winner Kailash Satyarthi) and more.

In Djibouti, the IPU supported young parliamentarians who had been elected to office in the 2018 elections. A two-day  workshop was attended by 70 per cent of the National Assembly’s young MPs, developing their leadership and  communications skills and helping them integrate youth perspectives into their parliamentary work. Besides building skills, the young MPs produced a roadmap to continue building capacity and to connect more effectively with the country’s youth. The plan includes strengthening the parliament’s network of young parliamentarians and raising awareness on youth issues too.

With IPU support, Africa’s most populous nation, Nigeria, is opening its politics up to youth. In 2020, we organized a high-level online conference on strengthening women’s and youth participation. Participants committed to adopt constitutional amendments and new legislation that enhances youth representation in both the National Assembly and at local level. Constitutional revisions are due in 2021.

In 2018, Nigeria had already reduced the age of eligibility to stand for election. The 2020 conference was part of ongoing IPU support in Nigeria, including similar conferences in 2017 and 2018.

Our impact: 10 years of youth empowerment in and through parliament

The tenth anniversary of the youth resolution was a good opportunity to look back at what has been achieved and to recommit to continued action. From youth quotas to lowering the age of eligibility to run for office and creating new parliamentary structures empowering youth, IPU Members have made significant progress. As part of the 10th anniversary celebrations, parliaments reported on their implementation of the 2010 Youth Resolution.

• In Norway, the Speaker of Parliament regularly meets with youth and, in collaboration with non-profit organizations, has produced a guide for youth to participate in social debates.

• Congress in Micronesia supported youth representation on national delegations to international meetings. Its programme has also prioritised and increased employment among socially and economically disadvantaged youth.

• In El Salvador, the first Parliamentary Youth Group, made up of parliamentarians between 25 and 35 years of age, was established.

• In Mexico, the Chamber of Deputies introduced measures to enhance youth representation in parliament, establishing a committee on youth and holding regular parliamentary hearings and youth consultations.

At the Fifth World Conference of Speakers of Parliament, the speakers renewed their commitments to youth empowerment and agreed a set of recommendations for increased youth participation in politics and parliaments. The IPU is anticipating another decade of action.

In 2021, the IPU will launch a major communications campaign to support intergenerational dialogues on youth policies and empowerment. Young MPs will drive these efforts and contribute to IPU deliberations in 2021.

Online training courses for young MPs will be another priority. We welcome any requests for cooperation from parliaments that would like to empower their youngest members.