Pacific parliaments in a time of pandemic 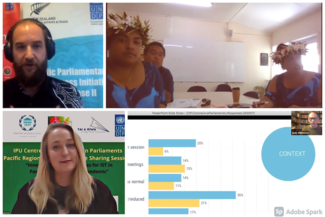 Proceedings of the Centre for Innovation in Parliament Pacific Hub Knowledge Sharing sessions webinars on 5 and 6 August. Photo: CIP.

The Pacific region is made up of thousands of islands spread across a vast ocean. In terms of ICT, this geographic disparity results in some unique challenges: high business and government transaction costs; irregular cargo and freight (compounded by COVID-19 border closures and reduced airlinks); and relatively recent connections to submarine communications cables, and domestic and international fibre optic cables.

Fortunately, much of the Pacific has remained free of COVID-19 cases. A number of smaller jurisdictions moved swiftly to implement states of emergency, border closures and quarantines to protect vulnerable communities with developing health infrastructures. This has heavily impacted tourism-reliant economies, and it is forecast that full recovery will take some years. Invariably, budgets to run parliaments are affected by the general financial climate, and there will be an ongoing need to work with partners such as UNDP (funded by Australia, Japan and New Zealand) and the IPU.

Summary of pandemic responses and issues in the region

The knowledge‑sharing sessions opened with the UNDP Pacific region office reflecting on its parliamentary assistance to Pacific region parliaments. It was recognized that the COVID-19 pandemic had had a tremendous effect on governance systems and structures, particularly on parliaments as institutions where people needed to gather and to meet to fulfil a constitutional mandate of legislation oversight and representation. The question was what could be done when they could not meet physically. We explored technical aspects, the adaptation of policies and procedures, and the variety of ICT‑based solutions needed for parliaments to continue to work, and to maintain openness, transparency and public trust. The importance of the network, sharing knowledge, and preparedness were central to our discussions. The IPU noted that, at the start of the pandemic, it had launched an information campaign. This had been useful to explore different contexts and levels of ICT capacity, as well as the engagement of leadership and their support for innovation.

The level and duration of lockdowns had varied greatly across the Pacific region, which had impacted the operations of parliaments in different ways. However, a number of common themes were raised during our hub sessions:

Notwithstanding these varied challenges, there were many positive outcomes. Pacific parliamentarians reported how virtual tools had enabled them to engage with more fellow MPs, more communities in remote locations, and more international meetings and discussions. One example was from the Legislative Assembly of Tonga and the Parliament of Fiji, which both had the remote support of the UNDP Pacific Floating Budget Office initiative. This is a network of parliamentary researchers from different national parliaments in the Pacific and beyond. The network comes together to conduct research and produce quick analysis of national spending trends and revenue before budgets are debated and voted on.