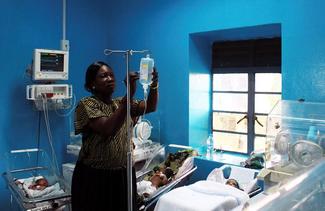 At a technical briefing organized by the IPU and the World Health Organization (WHO) on 23 May during the World Health Assembly, parliamentarians discussed how to move forward on providing universal health coverage (UHC).

IPU Members are expected to adopt the first global parliamentary resolution on UHC at the 141st IPU Assembly in Serbia in October. The resolution, “Achieving Universal Health Coverage by 2030: the role of parliaments in ensuring the right to health,” will set out concrete steps for parliaments to achieve Sustainable Development Goal 3 on health. Later this year, United Nations Member States will also adopt a political declaration on universal health coverage.

IPU Secretary General, Martin Chungong, and WHO Director General, Tedros Adhanom Ghebreyesus, made the opening remarks. Panellists included the three co-rapporteurs of the resolution—Bangladesh MP Habibe Millat, Swiss MP Christian Lohr and Brazilian MP Mariana Carvalho—as well as Fijian Minister of for Health and Medical Service, Ifereimi Waqainabete; Moldovan Permanent Representative to the United Nations, Oxana Domenti; Tunisian President of the Health and Social Affairs Commission and Chair of the WHO’s EMRO Parliamentary Network on Health and Well-being, Alouini Souhail; and IPU Director of the Division of Programmes,  Kareen Jabre. It was moderated by WHO Deputy Director General Zsuzsanna Jakab.

Dr. Tedros emphasized the vital role of parliaments, referring to them as the “engine room of universal health coverage”, saying that the resolution represented a “major milestone”. Speakers stressed the importance of taking vulnerable populations into account when drafting laws on UHC. The IPU will support parliaments in implementing the resolution by helping to build capacity so that the commitments on universal health coverage can become realities.

Summing up the meeting, Mr. Chungong said, “Parliaments should use the powers they have by voting good laws, by putting in place budgets and by holding governments to account for more effective health services around the world. This meeting is about translating democracy and strong parliaments into better and healthier lives for people.”