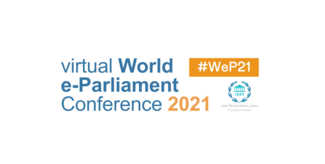 In June, the IPU’s Centre for Innovation in Parliament organized the 9th World e-Parliament Conference, held virtually for the first time due to the COVID-19 pandemic. The Conference, run over three days, attracted 650 participants, drawn from 119 national parliaments as well as regional and sub-national parliaments, NGOs and academia. The Conference proved popular, with 95% of participants rating it highly – 57% very highly – and over 90% indicating that they would like to continue the discussion at future events.

Organized thematically, the Conference explored topics including moving towards the digital parliament, services for digital parliamentarians, data, infrastructure and artificial intelligence (AI). In addition to the formal conference tracks there were 11 unconference sessions, 19 Parliamentary showcase videos and working groups on the development of new Quick Guides.

The main theme emerging from the three-day event was that parliaments have been changed by the pandemic, and have changed in a way that, while extremely challenging, has taken them forward and accelerated modernization.

We’ve had five years of innovation in five months

This was a common theme and the benefits for members were summed up well too, emphasizing that remote sittings have additional benefits beyond the immediacy of the pandemic.

[My colleagues] are keen on retaining remote working and hybrid working… because it means we can have witnesses from right around the globe.

Digital tools kept parliaments running and the work of IT departments was vital at this time. ICT has moved very much into the spotlight and is no longer a behind the scenes activity but is critical to the everyday work of parliaments. The focus must now be on how parliaments can leverage this rapid innovation and maximize the opportunities for modernization.

We intend to retain over 85% of today’s operations and innovations… the virtual parliament is here to stay.

This focus on digital transformation was not enough for some participants. Conference presenters often noted that what we have to focus on is not digital per se but business transformation and how parliaments adapt in terms of new ways of working and the culture shift to accommodate this. This has implications right across the institution, and more virtual sittings and remote working impact not just infrastructure but the people that support it too.

The move to remote working and cloud-based applications creates challenges for security; the Parliament of Mauritius talked about how the risk profile increases because systems are no longer kept behind closed doors and how parliaments must reassess their vulnerabilities in this area. Expanding on this, Sindiswa Ngcingwana, ICT Governance Specialist from the Parliament of South Africa, concluded that as parliaments migrate to the cloud there is important work to be done in data protection and data governance, including the classification of data, and the updating of relevant policies that govern data access, retention and disposal. Trust must also be gained among users, including MPs and parliamentary staff, and stakeholder engagement is required as part of the planning process so that migrating to the cloud is not seen as an “IT project” but as a “business project” that aligns with parliament's strategy and can demonstrate tangible benefits set against the perceived risks.

If digital matters and ICT keep parliaments running then data is at the heart of this. The Conference heard that parliamentary data has matured from being about supporting what parliament does to becoming vital not just for the parliament itself but also as part of their openness and transparency programmes. This requires data to be made useful and usable, with consideration of the role parliaments have in turning data into knowledge.

To be really open, [data] has to be open to participation, open to the citizens.

Maria Baron of Directorio Legislativo talked about how participation has to be a two-way process. She saw parliaments getting better at sharing data but not making enough progress in listening to the views of citizens in return. Where citizens are engaging with their parliaments, the volume of information can be complex. The New Zealand Parliament reported on their work developing qualitative analysis tools for committee submissions so that Members are able to get a clear picture of what the public is saying.

An emerging topic this year was artificial intelligence. The latest World e-Parliament Report reports that 10% of parliaments are using AI in some way. Though a new area, inroads are being made and parliaments are starting to experiment. Patricia Almeida, from the Brazilian Chamber of Deputies, explained how using AI in the legislative process does not take away or diminish the role of MPs, rather it is a support tool providing high-level information. Nevertheless, she explained, policies are needed to manage AI and it should be fully transparent and accountable. This new area is going to become more relevant and parliaments have a lot to learn.

Let’s scale up together and exchange approaches…

This was one of the key messages, not just about AI and not only from the Conference itself, but a lesson from the last 18 months of the pandemic – parliaments are better when they collaborate, working together to innovate and implement new solutions and practices. This was demonstrated in the working groups organized by CIP hubs to develop new Quick Guides. 98% of participants said that they would like to remain engaged with the work of the CIP and its hubs.