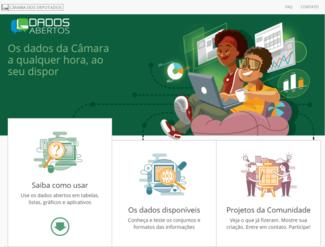 The new and less formal user interface. © Parliament of Brazil

Several parliaments have made large investments in recent years to make parliamentary information available to the public in open data formats, to increase transparency and facilitate public participation. However, usage of the open data has often been limited. The Brazilian Chamber of Deputies therefore decided to set up a marketing strategy to increase and diversify the use of their parliamentary data.

The Chamber of Deputies has been investing in its relationship with the Brazilian society regarding the Chamber’s data since 2006 when it launched SitCamara, an online service at the time only accessible to registered users, and made available to everyone in 2011 following the enactment of the Transparency Law.

In 2013, the Chamber of Deputies ran its first hackathon on the subject of "Legislative transparency and public participation". Besides the success of the 24 applications developed during those 4 days, another important outcome was a better understanding within the Chamber’s Open Data team of the pros and cons of the Open Data that it was publishing, in terms of its structure, formats offered, and so forth. Another hackathon in 2014 gathered more user comments and suggestions on the easiness and difficulties of working with the offered Open Data.

By analyzing the statistics of Open Data usage, comments from both hackathons and evaluations presented in academic studies, the Open Data team realized that simply making the data available was not enough. It began to apply different initiatives in order to improve data usage, with the goal of helping Brazilian society to participate in the legislative process.

One important focus was to improve communication with those who are most able to use Open Data—for example, software developers and programmers with political interests. This initiative aimed to enable developers to understand the formal language of the National Congress, and to build sites or apps that present the legislative information from different perspectives. As a result, in 2015 the Chamber of Deputies created accounts on online tech collaboration platforms, like GitHub, to smooth the relationship with these audiences and users. On GitHub alone, the statistics show about 70 opened issues per year, with more users asking questions and even helping others. This led to applications being developed more quickly and increased usage of the Chamber’s application programming interface (API). 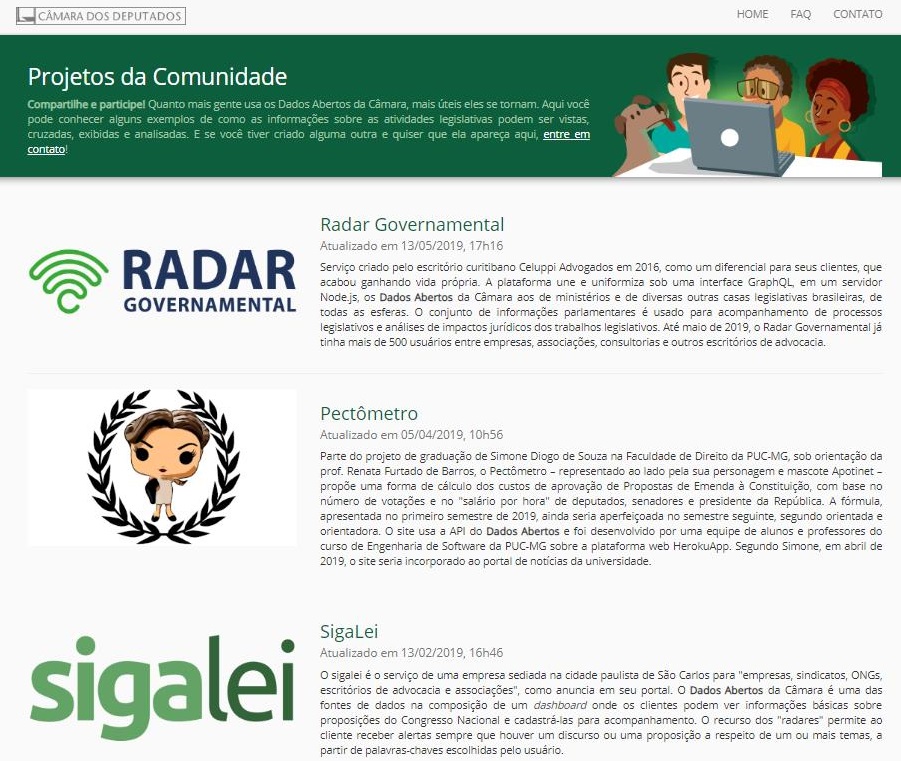 Open Data was already part of the Chamber’s main website, when a survey on how the website was perceived by ordinary people was carried out in 2016. Survey results led to the decision to build a separate, less formal and more user-centered website to showcase the Open Data.

Launched at the beginning of 2017, the new website is now more standardized and accessible for non-programmers through the following changes: the XML and JSON APIs are now more easy to re-use; the downloadable files are offered in different formats including XLSX (Microsoft Excel), ODS (OpenOffice/LibreOffice Calc) and CSV, as well as XML and JSON. Overall, the dataset is better structured.

That same year, the Chamber of Deputies joined the Campus Party event for the first time and launched a so-called "Programming Challenge" in which participants have more time (around four months) than in hackathons (usually up to four days). The extra time tends to provide more, well-thought out applications, and prizes offered for the top three finalists help to build motivation. Both favour captivating applications prone to be adopted by the people, which means more access to the APIs and downloadable files.

In late 2017, the Chamber of Deputies also started to promote Open Data in academic events, with schools and universities. Showing them how to do research using legislative data has been a way to improve the usage and get results from and to society.

To further enhance applications that use the Chamber’s open data, programmers are invited and encouraged to write about their developments and products in the service’s GitHub repository. They can request a short text and a link to their projects in the "Community Projects" page at the Chamber’s Open Data portal, which provides recognition and helps to spread their work.The Chamber of Deputies tries to alternate those initiatives over time, so it is continuously showcasing the open data and its potential to the Brazilian society. Nowadays, 7,000,000 calls to the Chamber’s API are recorded per week, on average.

Society is continuously changing, forcing the Chamber of Deputies to constantly be in contact with it in order to meet users’ needs. At the end of the day, it is not only a matter of getting better usage statistics for open data, but more about how open data can bring greater legislative knowledge to the people, hopefully improving the Brazilian democracy as a whole.