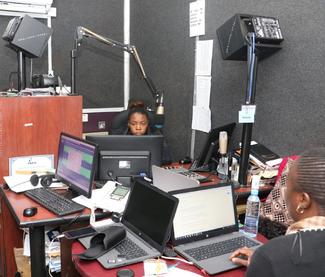 A decade ago, the National Assembly of Zambia saw a need to reach out to citizens and engage with them in a more efficient and transparent way. They chose to implement “questions and answers” sessions through radio broadcasts. We interviewed Julius Musumali, Parliamentary Radio/TV, and Michael Mukuka, ICT Director, of the National Assembly of Zambia to discover a little more how the radio broadcast worked and what were the plans for the future.

The Zambian Parliament disseminates information destined to citizens through various channels: the parliament’s website, TV and radio channels, as well as through constituency offices. All of which participate in bringing the parliament closer to the people, catering across all age groups and sectors of society.

The National Assembly Radio broadcasts every week from Monday to Friday. When parliament is sitting, all proceedings are broadcast live and an interactive programme called "Parliamentary Business Update" enables listeners to get involved and ask questions via text message. During the programme, experts explain the order of parliamentary business and invite questions on specific topics. Responses are immediately given by experts on air, or the next day if further consultation or research is needed. Meanwhile, "Know your MP" is a programme where citizens get to directly ask their questions to their MPs.

Listeners can receive prizes during the live radio show through reverse questions and answers (experts ask questions to the listeners who can win, for example, parliamentary publications and promotional material), which also helps to promote citizen knowledge of the law.

Mr. Musumali and Mr. Mukuka report that the radio channel is much appreciated by citizens throughout the country. When the SMS line was first introduced, the programme would receive an average of 5 to 10 text messages. As a result of efforts to engage listeners, the number has since increased to an average of 45 to 50 text messages per programme.

The National Assembly is keen to evolve its communication strategy to keep up with society’s modern use of social media. It is looking into expanding the Q&A sessions onto Facebook, pending the relevant policies and guidelines for moderation and management, as well as the necessary staffing as interaction on Facebook goes beyond the normal business hours of parliament. WhatsApp, which is already being used successfully to disseminate Order Papers to some MPs, staff and professional bodies, may also be considered by the National Assembly’s IT team. The premise of the new platforms suggests an even more transparent and interactive relationship between parliament and citizens in the long-term.