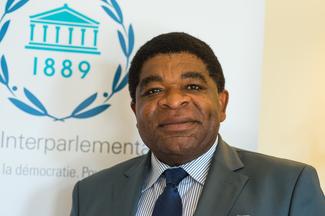 IPU is already deeply committed to promoting gender-equality at its events, in parliaments and in wider society. ©IPU/Jorky

IPU Secretary General Martin Chungong has pledged support for a new initiative on gender equality, building on his and the Organization’s ground-breaking record in the field.  The initiative – International Geneva Gender Champions – invites organizations to specify practical steps they will take to break down gender barriers, and sign a “Gender Parity Pledge”, committing them to work for equality in all Geneva-based discussions.

Secretary General Chungong vows that all IPU debates will include both male and female panellists, and that “parity debates” on a variety of topics, with equal gender representation on the panel will be held during IPU Assemblies. His other pledges includes ensuring that at least 30 per cent of MPs attending Assemblies are women, and that decision-making structures will comprise at least 30 per cent women by 2017, rising to 40 per cent by 2020.  He also promises to ensure that all IPU’s parliamentary support programmes will not only promote gender equality but that equality will be put at the heart of all the Organization’s work. IPU’s work environment will also be assessed from a gender perspective by 2016.

“Gender equality is the responsibility of all and progress will only be achieved if we all play our part. We need to challenge those who have not been playing theirs,” says the Secretary General.

IPU is already a strong advocate of gender equality and is working to increase both the number of women in parliaments around the world from its current level of 22.5 per cent and to strengthen gender equality across society through more effective national legislation.   The Organization also strongly encourages gender-balanced delegations to Assemblies and on its governing bodies, using measures including quotas and the loss of some voting rights for single-sex delegations.