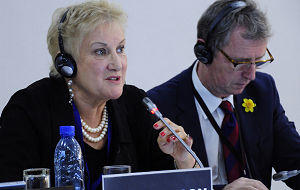 The debate tackled the obstacles to women's participation - from stereotypes to social media abuse. ©IPU/Jeremy Mukumbuta

MPs from across the world called for a paradigm shift in attitudes to women’s participation in political processes within parliaments, political parties and society.  The call came at the 134th IPU Assembly in Lusaka last week during a session on women’s freedom to participate in politics and how genuine partnership with men can contribute to this.  The debate, organized by IPU’s Committee on Democracy and Human Rights, explored the current obstacles to women’s participation, including discriminatory stereotypes, patriarchal culture and party concerns about whether seats are “winnable” with women candidates. The MPs addressed issues such as reconciling family and political life, the risk of suffering abuse on social media and traditional social views suggesting politics is not an appropriate career choice for women.  Possible solutions were proposed, including education on gender equality, quotas, financial support, change of practice within parties, access to leadership positions, and strong action against those who intimidate or harm female politicians. The session will inform a resolution to be adopted at the 135th IPU Assembly in Geneva this autumn.

The new Women in Politics map from the IPU and UN Women shows that women continue to be underrepresented across all levels of power. Watch the interview with Gabriela Cuevas, President of the IPU and Phumzile Mlambo-Ngcuka, Executive Director of
Read more