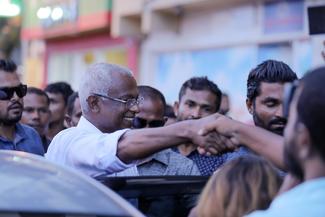 The IPU congratulates opposition leader Ibrahim Mohamed Solih on his victory in Sunday's presidential election. Provisional results show he received 58 per cent of the vote, defeating incumbent Abdulla Yameen who was seeking re-election for a second five-year term. The IPU calls for the results to be confirmed as soon as possible to respect the will of the people.

The IPU has been following closely the political situation in the Maldives and undue interference in the parliament, the People’s Majlis. In August last year, the IPU had strongly condemned a military lockdown of the parliament as well as the imprisonment and other human rights violations of opposition MPs. The IPU Committee on the Human Rights of Parliamentarians has been lobbying intensively over the years to defend the human rights of a number of prominent opposition MPs, including Ibrahim Mohamed Solih.

Gabriela Cuevas, IPU President, said  “I  salute the peaceful conduct of the elections and the outgoing President’s pledge to ensure a smooth transition of power.  As the world’s organization of parliaments, we are looking forward to working with Mr Solih and the People’s Majlis to help build a more constructive relationship between the presidency, the parliament and the judiciary, and to create a better mutual understanding of the respective roles of each institution.”

Martin Chungong, IPU Secretary General, said “I wish to congratulate Mr Solih wholeheartedly on his election as the new President of the Republic of the Maldives. Your message of hope has clearly resonated across the islands and struck a chord with your fellow country men and women.”

The Inter-Parliamentary Union (IPU) has expressed deep concern about the increasing repression and escalation of human rights violations against opposition MPs in Cambodia, Venezuela, Turkey and the Maldives on the closing day of the 137th IPU Assembly in St. Petersburg, Russian Federation. The IPU has called for fact-finding missions by the IPU Committee on the Human Rights of Parliamentarians to be sent to the four countries in the very near future.
Read more
News in brief