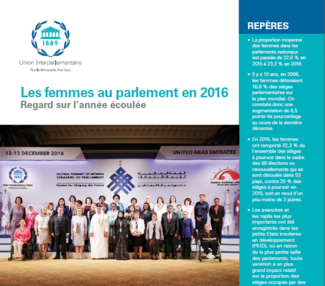 IPU’s “Women in Parliament in 2016: The year in review” released ahead of International Women’s Day on 8 March calls for renewed momentum to ensure women’s voices everywhere are included in decision-making processes. As in previous years, the report hammers home the point that women’s political empowerment cannot be taken for granted.

The worldwide average of women in national parliaments increased from 22.6 per cent in 2015 to 23.3 per cent by the end of 2016. Ten years ago, women held 16.8 per cent of parliamentary seats in the world – a 6.5 percentage point gain over the last decade. However, the rate of progress has stabilized in recent years, underlining the need for relentless efforts in order to achieve gender balance in politics.

“We must seize the opportunity to build on the successes of recent years because hard-won progress can often be fragile and readily lost, particularly at a time when engaging in politics has become even more challenging. Parliaments are crucial to ensuring women are among the world’s most high-profile leaders and to strengthening the policies and legislation needed to meet the goal of gender equality and women’s full and equal participation at all levels by 2030,” says IPU Secretary General Martin Chungong.

The slight increase in the number of women MPs contrasts with  the higher rate of progress for women Speakers of Parliament, which has reached an all-time high, with 53 women heading a parliamentary chamber (out of the 273 posts globally). Women hold now 19.1 per cent of all presiding officer posts in the world, an almost three-per-cent point increase since 2015.

Nine new women Speakers were elected or appointed in 2016. The new Speakers of the Parliaments of the Syrian Arab Republic and Viet Nam made history last year, becoming the first women to be elected to that position in their respective countries.

In a year when parliamentary elections took place in 53 countries, the greatest gains and setbacks were recorded in Small Island Developing States (SIDS), where the relatively smaller size of parliaments has a bigger impact on women’s share of seats.

The highest gains made by women in parliament in 2016 were in the Pacific, a region not traditionally known for gender-inclusive political leadership. The regional average of women in parliament increased to 17.4 per cent in 2016 from 15.8 per cent in 2015. These gains came in the wake of the 2012 Pacific Leaders Gender Equality Declaration that focused more attention on women and decision-making.

In Europe, women’s parliamentary representation increased from 24.4 per cent in 2015 to 26.3 per cent in 2016, with significant gains in Cyprus, Iceland and Montenegro. In Ireland, a legally binding candidate quota introduced in 2012 resulted in a 7.1 per cent point increase in the number of women in the lower house. On the other hand, there were important electoral losses, particularly in Croatia, Lithuania and Belarus; in Spain, where the electoral law mandates “gender balance”, it proved difficult for women to go beyond the 40 per cent target.

In the Arab States, women’s share of seats in parliament increased to 18.1 per cent in 2016, maintaining steady progress over the past decade to ensure greater gender inclusiveness in politics. Much of this has come as a response to public and international pressure for greater transparency and democratic accountability in the region. The strongest gains were made – notably in Morocco and Jordan – where political leaders heeded these calls.

Last year was no exception and elections in Asia were held without any dramatic changes. Women’s representation in parliament increased by 0.5 per cent, from 18.8 per cent in 2015 to 19.3 per cent in 2016. Increases, albeit moderate, were registered in all countries holding elections (Iran, Japan, Laos, Mongolia, the Philippines, Republic of Korea, and Viet Nam), with one notable exception - India. This demonstrated that incremental change can still be meaningful and powerful.

The Americas remain the region with the highest regional average for women in parliament after recording a 0.9 point increase in 2016, up to 28.1 per cent of parliamentary seats. The pursuit of legislative reform designed to enable women to hold 50 per cent of decision-making positions contributed in large measure to these advances. For example, Nicaragua made gender balance in party lists mandatory and the Dominican Republic introduced legally binding candidate quotas.

Legally binding electoral gender quotas were also a key factor in the relatively moderate increase in the share of women parliamentarians in sub-Saharan Africa (from 23.2 per cent in 2015, to 23.6 per cent in 2016). It showed that quotas allow countries to maintain a relatively stable representation of women in parliament. Where quotas were not in place, substantial setbacks were recorded.

The year 2016 showed once again that quotas, as they stand today, are clearly effective in delivering greater numbers of women in politics and ensuring a minimum level of women’s representation in parliament. However, they do not always extend beyond the so-called “critical mass” of 30 or 35 per cent of women’s seats in parliament, and remain difficult to adopt (last year the only new quota law to be passed was in Liberia) for various reasons.

The IPU report also highlights the misogynistic and sexist sentiments that permeate public and private spheres when women claim their space in politics, revealing the extent to which women still struggle every day to be considered legitimate political actors. Efforts must be redoubled to address those factors that deter women from entering politics.

“It is time for more ambitious measures to take women’s participation and political voice to the next level. A great deal has been achieved in recent years, but more needs to be done to effectively embody gender equality and deliver it,” adds Secretary General Chungong.