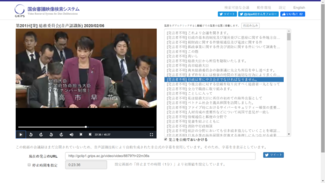 The AI-supported video retrieval system for deliberations in the Diet of Japan. Photo: © National Graduate Institute for Policy Studies

The European Centre for Parliamentary Research and Documentation (ECPRD) held its ICT2019 Seminar at the Riigikogu of Estonia in Tallinn on October 3 and 4, 2019. The seminar is the annual gathering of senior ICT officials from parliaments across Europe and further afield, who come together to share knowledge and experiences.

The 2019 seminar focused on Artificial Intelligence (AI) in parliaments, looking at projects and innovations. While proceedings touched on "General AI" - the type of AI that out-thinks, out-performs, and can often replace humans, the seminar remained more grounded in discussions on "Narrow AI" where AI is used for narrowly defined roles and can work in conjunction with people to help them accomplish tasks faster and better. Some of the underlying technologies that drive these "Narrow AI" solutions include: voice and face recognition, text classification, conversational or interactive bots, natural language processing, pattern recognition, machine learning, and many more. Some of these examples are at work in Alexa and Google Assistants.

The Centre for Innovation in Parliament took part in this event, providing a window on ongoing projects in parliaments outside of Europe. Based on our research on AI pre- and post- the event, and presentations delivered in Tallinn, we are pleased to highlight the following use-cases of AI in parliaments.

Assistance services to MPs
The Parliament of South Africa is exploring using a chatbot to assist members of parliament with parliamentary information. In this pilot, MPs would be able to speak to the chatbot and ask questions, such as the status of a particular bill, resolution, question, or oversight process, or what is a particular house rule. More practical questions would be supported too, such as the venue for a meeting or whether an MP could travel to a particular destination. The chatbot would be based on conversational interface technology as well as Natural Language Processing (NLP).

Legislative drafting
The US House of Representatives has introduced an AI tool to automate the process of analysing differences between bills, amendments and current laws, supporting legislative staff to more readily see the impacts of amendatory provisions contained in bills they move through the legislative process. Using NLP technology the tool is capable of interpreting citations to legal provisions described in bills, and retrieving those provisions and interpreting and executing amendatory instructions. Already available to the Office of Legislative Counsel, the tool presently operates at an accuracy level of 90, with human feedback improving this the more the system is used.

Parliamentary reporting
The Netherlands House of Representatives implemented the "Speech2Write" system which offers its Parliamentary Reporting Office (PRO) the ability not just to convert voice to text but instead "translate" voice into written reports. Speech2Write comprises automatic speech recognition and automated editing capabilities that can remove filler words, make grammatical corrections and propose editing decisions. It produces an "almost-ready" report for human finalization. The system is based on a parliamentary language model, which has been developed from scratch, and machine-learning based on 2000+ hours of audio of proceedings and corresponding Hansard text files.

Transparency and citizen participation
The Seminar also received the following video contribution from the Brazilian Chamber of Deputies, on its ongoing Ulysses project (a Specialist hub within the Centre for Innovation in Parliament), presenting the different applications of AI technologies and concepts to support parliamentary transparency and citizen participation.

Contact us
The Centre of Innovation in Parliament continues to watch the AI trends. Should your parliament have notable developments on AI to share, we are keen to learn more. Write us at [email protected].