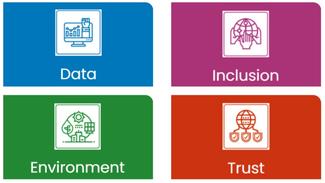 The Centre for Innovation in Parliament partnered with the UN Department for Economic and Social Affairs to host the Second Parliamentary Roundtable at the Internet Governance Forum in November 2020. Parliamentarians were among various stakeholder groups at the Forum’s ‎annual ‎meeting, which is a global policy dialogue on data, inclusion, security ‎and ‎other aspects of internet governance. In 2019, the first Roundtable resulted in The Jimmy Schulz Call, a message from parliamentarians‎ that encouraged national parliaments to cooperate and exchange best practices for dealing with internet-related public policy issues.

The COVID-19 pandemic has made it clear: the internet is more critical than ever for keeping up basic economic processes, social interaction and a minimum of cultural life. The priorities should therefore include meaningful access for all people, good digital policies and internet governance, and trust in public officials and information. Parliamentarians have an important role in ensuring that the internet remains accessible, open and safe for everyone. In these people-centred processes, parliaments must be guided by public trust, both in themselves as legislators and in the internet itself.

The Internet is all-pervasive. It affects multiple aspects of our lives and has become normative for many people. Yet digital and gender‑based divides must be addressed by all, including parliamentarians, so that everyone can benefit equally from the immense power of digital technologies to support sustainable development. For those connected, safety and security online are not yet norms; and alongside its positive aspects, cyberspace challenges us to deal with information overload, misinformation and disinformation. Increasingly, it is hard to distinguish fact from fiction, or outright untruths. The World Health Organization has noted that this has created significant problems in fighting the pandemic, with an infodemic (an unprecedented overabundance of both accurate and false information) preventing people from accessing authoritative, reliable guidance about the virus.

Liu Zhenmin (UN Under-Secretary-General for Economic and Social Affairs) opened the session by saying that COVID-19 only confirmed the importance of our reliance on the internet. Martin Chungong (IPU Secretary General) described the internet as both a transformative tool for knowledge, communication and information, and a dangerous tool due to fake information and conspiracies. He noted the importance of being able to trust online information, in the same way that it is important to trust legislators acting on people’s behalf.

Margarita Escobar (El Salvador) reported that the pandemic had brought parliamentarians and other stakeholders closer. In El Salvador, she was working with civil society organizations on digital law. The internet was now crucial for promoting public sector transparency, building trust, and drafting new laws consultatively. In Poland, Krzysztof Gawkowski confirmed how the pandemic had accelerated the shift to the online world, and Mattia Fantinati (Italy) observed that many online movements had started with the aims of strengthening democracy and fighting corruption. He emphasized that the internet belonged to everyone and gave us an unprecedented toolset to develop free and critical thinking.

Manuel Höferlin (Germany) and others acknowledged the critical role that parliaments had to play in governing the internet. He suggested a more active network of parliamentarians around the world who could discuss and learn from each other about the most pressing issues related to digital technologies and policies. Mr. Höferlin promoted the idea of an informal inter‑parliamentary working group. Marina Kaljurand (European Parliament) echoed this sentiment, and suggested that members of parliament needed to be included in discussions about digital technologies and related policies. Trust between all internet governance stakeholders was crucial because, without it, societies would not be able to take advantage of the benefits of digital tools. This also meant addressing the important issues of cybercrime and digital hygiene, a point echoed strongly by Alexander Khinshtein (Russia).

Francesco Berti (Italy) called on young parliamentarians to push the digital agenda and tackle the problem of digital education, seeing disinformation as a threat to democracy. Without regulation, the internet could not provide trust. Parliaments played a crucial role in ensuring that both regulation and education were well thought through, appropriate and working.

The Parliamentary Roundtable produced an Output Document, which includes the following recommendations:

To build public trust in the internet, parliaments and their members should consider:

To increase public trust in parliamentarians, parliaments and their members should consider: