Zambia’s National Assembly innovates with – and shares - a parliamentary app 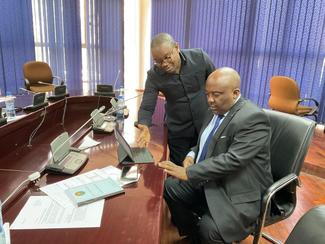 Faced with the disruptions of COVID-19, the National Assembly of Zambia chose a hybrid format for its plenary meetings. While a limited number of MPs sat in the main assembly hall or nearby rooms, others connected remotely through a video conferencing platform. Despite the technology, however, parliamentary business, including votes, remained hard to manage.

But a new eChamber app may be changing that. In May 2020, following the examples of other parliamentary apps such as the InfoLegis app in Brazil, Zambia’s National Assembly started to develop its own eChamber app, releasing the first version in June 2020. Once installed on the mobile devices of MPs and their staff, the app allows users to log in using secure authentication and to participate in plenary proceedings. MPs are able to register for attendance, access meeting information, request to speak, raise a point of order, call for and challenge divisions, and to vote. The eChamber app is used with Zoom for videoconferencing.

Challenges with the first version led to the design and release in October 2020 of a second version as a standalone mobile app. A third version was released in September 2021 for Android and iOS, and is currently available in the Google Play and Apple app stores.

The National Assembly showcased its eChamber app at the IPU’s virtual World e-Parliament Conference (16–18 June 2021). Then, within the Southern Africa regional hub, it was shown at the IPU Centre for Innovation in Parliament.

Unsurprisingly, the app has generated plenty of interest from other parliaments. The ICT department in South Africa’s Parliament expressed an interest, aiming to co-create value in the region, and Zambia’s National Assembly then shared the eChamber app and source code. In Malawi, the UNDP has been providing the country’s Parliament with modernization support. It noted these developments and exploratory talks have begun on adopting the eChamber app.

The National Assembly of Zambia continues to work with partners in the region, including through the Centre for Innovation in Parliament (CIP) Southern Africa hub. It is making the app available to other parliaments in the region and providing technical guidance on its adaptation and use.