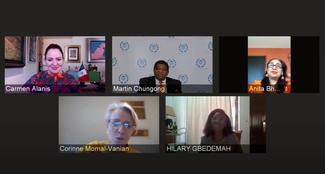 On 25 November, the International Day for Elimination of Violence Against Women, the IPU and the Kofi Annan Foundation organized a webinar with key actors to evaluate successful policy responses to violence against women in politics (VAWP).

Participants spoke about how violence against women in politics is a deliberate tactic to intimidate women and prevent them from participating politically. This is reinforced by the perception that women who go into politics need to be especially tough; if not, they have no business being in politics.

Panelists discussed how the problem begins at the level of political parties, which tend not to field women candidates because of the assumption that they cannot win, or else women are asked to campaign for unwinnable seats.

“Violence against women in politics is a threat to democracy”, said IPU Secretary General Martin Chungong. “There can be no democracy without women. It is not enough to decry violence against women: we must act. Parliaments should lead by example and practice what they preach. They should ensure that they are free of harassment so that women can operate in a safe environment.”

Ms. Alanis, who presented her report for the Kofi Annan Foundation on VAWP, said that if we were to eliminate VAWP, the questions we should be asking are: why do women face barriers in exercising their political and electoral rights; why is the problem still not adequately addressed by states; and whether current models of justice engage effectively with violence against women in politics.

Participants discussed solutions that could help towards eliminating VAWP. Awareness raising came up repeatedly: to deal with VAWP, people must first understand that there is a problem. The importance of setting up legal frameworks and effective mechanisms to report abuse, so that women feel confident that they would be supported, were also stressed. Parliaments can carry out surveys to assess the situation, then fashion policies to address it, for example, by passing laws that criminalize VAWP, as Bolivia had done. The IPU’s Guidelines for the Elimination of Sexisim, Harassment and Violence against Women in Parliament contains many such solutions.

Access to justice is crucial to help eliminate violence against women, Ms. Gbedemeh emphasized that justice should be accessible, available, of good quality and affordable, both in term of time and benefits.

The COVID-19 pandemic has spawned a shadow pandemic of increased violence against women; this should be taken into account in building back better. VAWP was not something to be dealt with at the household level, but one requiring a public policy solution. The post-pandemic recovery strategy should include also guidelines on equal participation of women in decision making.