2021: A year when attacks on democracy intensified 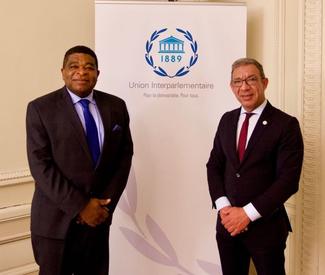 2021 bore witness to several assaults on democracy, starting with what many saw as one of its bastions – the US Congress. Then Myanmar suffered a bloody military coup which unravelled in an instant nearly a decade of democratic progress led by its elected Parliament. Tunisia, celebrated since 2011 as the Arab Spring’s sole success story, saw its President suspend Parliament for months. Afghanistan’s Government fell to the Taliban, plunging the country into chaos and its fledgling Parliament into limbo. The epidemic of coup d’états throughout the year was relentless with more attacks on parliament in Guinea and Sudan.

The knock-on effect on parliamentarians themselves was unambiguous. The IPU recorded another all-time high number of parliamentarians suffering from human rights violations – at least 673 parliamentarians from 44 countries, an increase of 22 per cent compared with last year and a figure which is probably just the tip of the iceberg.

The IPU rallied its Members

The political instability and democratic backsliding, however, only confirmed the resolve of the IPU Members to come together to find common solutions to global issues through parliamentary diplomacy and dialogue.

Although still facing lockdown conditions on and off all year, we continued to bring parliamentarians around the table – or a computer screen – fulfilling our 132-year-old role as a global convener of parliaments.

In May 2021, the 142nd IPU Assembly was the first to be held virtually. More than 1,000 parliamentarians and experts from 135 countries joined in; 37 per cent of the participants were women MPs and 26 per cent were young MPs. The virtual format allowed us to reach parliamentarians who had not necessarily been able to come to our physical meetings before – one clear advantage of hosting events online.

By September we were once again able to physically meet. The Fifth World Conference of Speakers, organized jointly by the IPU and the Austrian Parliament, in cooperation with the United Nations, brought together the world’s top legislators in one of the first major in-person international meetings since the beginning of the COVID-19 pandemic.

The high-level declaration from the Speakers underscored the importance of international solidarity and cooperation between parliaments in recovery efforts from the pandemic.

In the lead-up to the UN’s climate talks at COP26, we held a pre-meeting in Rome in October with the Italian Parliament followed by a meeting in Glasgow in November, co-organized with the British Group IPU.

Over 200 parliamentarians committed to taking urgent action on the climate emergency laid out in an ambitious roadmap for parliaments in a carefully negotiated and powerful outcome document.

And at the end of the year, the Parliament of Spain stepped in at the last minute to host the 143rd IPU Assembly in late November in Madrid. It was the first IPU Assembly to take place in the European Union since 1999.

The overall theme Contemporary challenges to democracy: Overcoming division and building community was timely as the IPU Members adopted the Madrid Declaration calling for a new approach to democracy and a renewed commitment to core democratic values.

The Assembly was also marked by an outpouring of parliamentary solidarity with the unanimous endorsement of an emergency resolution to support equitable access to vaccines, particularly in the developing world.

Empowering parliaments through research and guidance

To help parliamentarians navigate the many challenges facing the world, throughout 2021 the IPU offered expert guidance based on its unparalleled research.

Our annual Women in Parliament report continued our decades-long monitoring of the global proportion of women in politics. The report showed growth as well as setbacks. In 2020 a record 25.5 per cent of MPs were women, representing an increase of 0.6 points compared with 2019. However, the Women in Politics report revealed that the number of countries with no women in government had increased, a downward trend seen the last few years.

The IPU report Youth Participation in National Parliaments found the global proportion of MPs aged under 30 had edged up to 2.6 per cent, up 0.4 percentage points from two years ago but still far from representing the 50 per cent of the global population in the same age group.

To help address this deficit, we launched a new communications campaign: I Say Yes to Youth in Parliament! The campaign is designed to mobilize parliamentarians and leaders of all ages to take action to rejuvenate their parliaments.

In just a few months, the campaign has spread all around the world. Hundreds have already signed up, including over 315 MPs from 109 countries. Many Speakers of Parliament, Heads of State and Government and United Nations agencies, Ambassadors and leaders of civil society have pledged to take action to encourage more young MPs in their countries.

We can all be proud of our collective achievements.

Despite setbacks in several countries in 2021, the IPU remains steadfast in its mission to make parliaments stronger, younger, inclusive, innovative and resilient.

Despite the continuing pandemic, we continue to accelerate our digital transformation to increase our influence on global governance.

As President and Secretary General, we reiterate our commitment to mobilizing parliaments worldwide toward a fairer, more inclusive and egalitarian future.

We will be guided by the new IPU strategy that seeks to build stronger and more resilient parliamentary ecosystems, with parliaments as the centerpiece, and for the benefit of all.

We wish all our Member Parliaments, their members and loved ones well as we move into 2022.