How the IPU managed remote voting at its virtual Governing Council 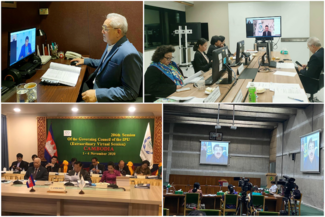 Like its Member Parliaments, the IPU has needed to rapidly adapt its functioning as a result of the COVID‑19 pandemic. The regular face-to-face meeting of the full membership – the IPU Assembly – could not take place as planned in April and October 2020. However, the Organization needed to make critical decisions about its 2021 work planning and budget, and to elect a new IPU President. Inspired by the range of innovations introduced by parliaments[1] around the world in response to the pandemic, the IPU decided to hold an extraordinary virtual session of its Governing Council from 1 to 4 November 2020.

The centerpiece of this virtual session was remote voting for the new IPU President. In the end, the election proceeded smoothly on 1 and 2 November. Over a period of 24 hours, 394 parliamentarians from 142 countries cast their vote online – a turnout of 97 per cent of the members of the Governing Council who were eligible to vote. In this article, we describe from a technical perspective the main elements of the organization of the remote voting, and identify some lessons learned.

The IPU’s 18-member Executive Committee decided in June 2020 to organize a virtual session of the Governing Council. The first step for the IPU Secretariat was to draw on the good practices and lessons learned from parliaments since the beginning of the pandemic. The IPU’s Centre for Innovation in Parliament had for some months already been monitoring these developments and helping parliamentary IT directors to network and exchange experience. The good practices that had emerged included the need to:

This final point was critical in the IPU’s context, given the political significance of the election.

In order to prepare for the virtual Governing Council, the Executive Committee set up a Working Group (sub-Committee) composed of representatives from the geopolitical groups, the Forum of Women Parliamentarians and the Forum of Young Parliamentarians, and supported by the IPU Secretariat. The Working Group, with input from the IPU’s legal counsel, designed Special Rules of Procedure that would apply to the November 2020 virtual session, as well as to possible future virtual sessions of the Governing Council.

The Working Group insisted in particular upon four key pillars for the election: to ensure the secrecy of the ballot, security of the voting platform, access for all members of the Governing Council, and oversight of the voting process and results. The Working Group’s conclusions were subsequently approved by the Executive Committee and shared with all IPU Member Parliaments.

The IPU Secretariat developed the technical requirements for the remote voting. A Request for Proposals was published for an online managed electoral service that would be globally available and would offer high levels of security, secrecy, reliability, auditability and trust. Outsourcing the remote voting solution as a managed service was necessary in light of the IPU’s own limited IT resources and staffing.

After a careful evaluation of bidders, Civica Election Services (CES) was selected. CES (formerly known as Electoral Reform Services) is a UK-based company with significant experience in organizing elections

Project teams from CES and the IPU Secretariat began work in late September to create the processes and platform for the election. The IPU Secretariat developed extensive documentation for members of the Governing Council (i.e. parliamentarians) and the staff of national IPU groups about the election process and what they should be prepared to do.

Oversight by an independent auditor

To ensure oversight and build confidence among the membership, the Executive Committee decided to seek the services of an independent auditor who would monitor the preparatory phases as well as the election itself. After consideration of the available options, the United Nations International Computing Centre (UNICC) was chosen for this role. It was willing and able to mobilize at short notice a team of senior cybersecurity specialists with extensive experience in conducting IT audit exercises.

The terms of reference for the independent auditor centred on the four key pillars identified by the IPU’s Executive Committee. After studying the project documentation, the auditor interviewed CES to verify its procedures in areas such as data management, risk assessment and cybersecurity testing. The auditor then produced an initial report on its findings one week before the opening of the Governing Council, which provided confirmation to the membership that the requirements were being met. It presented these conclusions to the meetings of the Executive Committee and Governing Council.

A test election was run from 20 to 29 October. The dual purpose was to test the functionality of the online election platform and the voting process, and to give members of the Governing Council the opportunity to familiarize themselves with arrangements and check that they were able to cast their vote. In addition, the test election allowed parliamentary staff in the national IPU groups of each parliament to get more information about the overall process and how they would be able to support the members of the Governing Council in their parliament.

The test election also offered the independent auditor the chance to make their first critical assessment of the online voting platform and whether the four pillars required for the election of the IPU President (secrecy, security, access and oversight) were being met. For the IPU Secretariat, it was a welcome opportunity to test its capacity to respond to questions from Member Parliaments with the support of the remote voting helpline operated by CES.

The test election yielded a turnout of more than 75 per cent, which provided a good level of assurance that these members of the Governing Council would be able to vote during the real election. Feedback from a short user survey showed that voters rated their satisfaction with the ease of access and use of the voting platform very highly.

Carrying out the remote voting for the new IPU President

When remote voting for the IPU President opened on 1 November, all the processes had been tested and communicated to Member Parliaments. As a result, everyone was ready and the conditions were in place for the election to proceed smoothly.

The key events in the election were:

The virtual session of the IPU’s Governing Council demonstrated that it is possible for an international organization to continue to operate and to take fundamental decisions during the pandemic. The election process was accepted by IPU Members. The 97 per cent voter turnout offered great legitimacy to the process and its outcome.

[1] The early adopters of virtual meeting technology and innovation include those parliaments referenced on the compilation page of the campaign Parliaments in a time of pandemic.