How the Parliament of Maldives built a virtual chamber 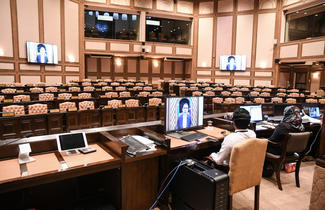 We often associate leadership in digital innovation with the big parliaments, but the Maldivian Parliament shows us that being small means you can also be agile and responsive. With a strong ICT strategic planning process already in place and a pragmatic agreement that existing parliamentary rules are sufficient to run the parliament virtually, it has become one of the first in the world to host a virtual plenary during the coronavirus crisis. In this article, the People’s Majlis explains how it took a range of already available software applications and brought its members together remotely, enabling debates and voting, whilst retaining the ability to broadcast proceedings.

Applying the Rules of Procedures to remote meetings

Article 70 of the Constitution of Maldives states that the People’s Majlis is vested with law-making powers: amending the Constitution; amending and repealing any law which is not consistent with any tenet of Islam; and supervising the exercise of the executive authority. Given the current State of Public Health Emergency, it is imperative that the People’s Majlis remain functional, performing its constitutional mandate.

The Parliament had already procured Microsoft Office 365 Business Premium in December 2018. We would have a maximum of 97 participants (87 MPs and 10 secretariat staff) using Microsoft Teams, hence, the maximum allowed count of 300 users under the Business Premium plan was more than enough. There are some differences to the features you get in Teams depending on whether you have the Business version or the Enterprise version, such as the creation of Live Events.

There are a few software add-ons included in Teams that can be used for voting; Polly is one of them. Though it has some limitations, we have been able to manage. In the rare case that Polly fails, MPs are requested to provide their vote in the chat panel by typing yes/no/abstain.

For our plenary sessions, we use three powerful computers dedicated to managing the Teams meeting and broadcasting. PC1 is for managing the meetings (as organizer); PC2 is dedicated to the speaker’s feed (see below for reasons); and PC3 is used to switch between all the other participants as well as handling the sound for all participants. In our setup, PC1 and PC3 are very powerful machines with AMD Ryzen 3900 and AMD Threadripper 2990WX CPUs respectively. Microsoft Teams is based on Electron (https://www.electronjs.org/) and is a fairly heavy application. When we are constantly muting/unmuting/pinning participants, powerful systems give us less trouble doing these tasks.

The first step was making sure all the device drivers etc. were properly configured. The next step was to install Microsoft Teams. In our case, installing the Office 365 package automatically installed Teams as well. We then installed a software called Virtual Audio Cable (https://www.vb-audio.com/Cable/) on PC1. This, along with some clever configuration of the Windows sound settings and the Teams device options, allowed us to send audio being played on the machine back to the meeting. This was to accommodate the playback of the various chimes that are otherwise normally played during the sessions. Apart from this, PC1’s configuration is standard. PC2 and PC3 have graphics cards with multiple outputs. One output is for their own monitor and another is sent to our production room via NewTek Spark devices (https://www.newtek.com/spark/) over NDI. Audio is embedded through the NDI stream from PC3.

Though Microsoft Stream is included in Teams, we do not use the platform for live streaming. Instead, we use social media platforms (mainly YouTube) and distribute the same feed to all local television stations via a dedicated fibre network.

Our production is handled by a NewTek TriCaster TC1 (https://www.newtek.com/tricaster/tc1/) which takes in NDI feeds natively over IP. The TriCaster TC1 handles the feed over SDI to local channels as well as live streaming to YouTube.

The organizer logs in to PC1 via the same Office 365 account that created the Teams meeting and joins the meeting.

The organizer tests the sound and configures the meeting options. Meeting options in our case include assigning a presenter role to our secretariat staff and Speaker. This makes it easier for us to keep track of the number of MPs present at the time as MPs are listed under a dedicated category (Attendees) in the participants pane.

The organizer mutes all MPs.

The MPs request to speak through the Teams chat function and the request list is maintained manually by secretariat staff. The Speaker announces the name of the next member to speak and MPs themselves unmute their microphone and start talking. Once the member starts talking, the media staff operating PC3 will pin the currently speaking member so that they fill up the entirety of the screen. It is up to the media staff how to show the video to the public. They can also split views between the Speaker and the MP or any other combination relevant to the discussion.

Once an MP finishes speaking, the organizer ensures that the MP’s microphone is muted.

At all times, secretariat table staff and media staff have their PCs muted, so that unwanted sound does not get into the broadcast.

Committee sessions are much easier, as there is not much moderation being done compared to the plenary meetings. The legal officer associated with the particular committee will invite all MPs along with a media officer to the Teams meeting. Permission to speak is granted (verbally) by the committee chair. The media officer’s task is to join the meeting on a relatively powerful computer and stream the audio of the meeting via a software called OBS Studio (https://obsproject.com/). It also has the capability to stream video, but we are not currently broadcasting any video of committees through Microsoft Teams.

Getting MPs and senior staff ready for the remote meetings

To help us get a good understanding of the Teams platform before discussing it with the members, we first held numerous test meetings between secretariat staff over the course of a week. After we got a good grasp of the ins and outs of the platform, we commenced some training sessions for MPs. The training sessions were very well received. Overall, apart from the occasional microphone or webcam issue, we have not had much difficulty in getting everyone online. If required, we provide any assistance to them directly through Teams with the desktop-sharing function.

How is connectivity of MPs supported?

Basically, MPs use their own devices and internet connection. Most MPs already have access to laptops. In rare cases where an MP does not have access to a laptop, they use their smartphones with Teams installed. The laptop specifications are fairly standard.

Internet access outside the Parliament House is not provided or paid for by the secretariat. MPs connect online from various locations: their homes, their private offices or even other islands. Surprisingly, Teams does not consume a large amount of bandwidth even with meetings of our size. Even throttled connections (at generally 1 Mbps) handle it fairly well. Of course, video quality improves greatly with better bandwidth available at both ends. Our location is also physically far from any Microsoft data centre, which could play a part in hindering our experience. This might not be the case for other parliaments in other countries.

The Teams platform has limitations that must be worked around and is not a substitute for a full-blown electronic conference system with all the features that we have been used to for parliament sessions. For example,

It is not possible to completely silence a participant without expelling them. It is possible for any participant to unmute themselves and start talking.

The video stream can occasionally get stuck due to reasons beyond our control, such as internet issues at either end.

Polly, the plugin that we use for voting, has a few quirks that can bug and stop working at times. Also, Polly does not allow us to limit the voting time to less than 30 minutes. However, we can manually close voting when the specified voting time is up.

Patience and cooperation from all participants are key to holding smooth sessions.

Watch this short video of the Majlis's remote session.