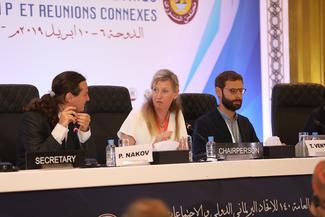 The panel at the hearing on fake news. © IPU/Aboos Images

"Junk" rather than "fake" news

The most important outcome of the hearing was to extend the reflection from the narrow issue of the news hoaxes circulating online to the larger and thornier problem of the quality of public debate online. Such problems, all the experts agreed, could not be solved by simply detecting and removing problematic contents, but needed to be addressed by questioning the very infrastructures of online communication and the way in which they contributed to the degradation of online political conversation. To designate that  larger issue, Venturini proposed the expression "junk news", which (in analogy with junk food) highlighted the addictive nature of that type of misinformation and drew attention to the industrial system assuring its production. Similarly, Nakov underlined that the economic incentives to capture the attention of online users were, to a large extent, responsible for the increasing visibility of provocative and divisive discourses.

Harmful is not illegal

Several interventions from the audience pointed to the importance of finding ways to address junk news without limiting the freedom of speech in online and offline media. The Chair Arda Gerkens proposed that a distinction be made between "harmful" and "illegal" online contents which was deemed very useful. Though the separation between the two is sometimes difficult to draw, it would be a mistake to address them in the same way. While "illegal" contents (i.e. supporting violence, terrorism or other criminal actions) should be identified and removed using existing regulation, the same policing solution should not be applied to junk contents, which could not be removed individually (which would be impossible and close to censorship), but should rather be opposed by addressing their economic and technical roots.

A wide consensus also emerged between the panellists and the audience on the fact that social media platforms constituted an essential part of the problem and needed to be made accountable for the consequences generated by their technological and commercial infrastructures. In line with the harmful/illegal separation discussed above, platforms should not be asked to monitor or filter junk news (becoming a sort of "Ministry of Truth" in the words of Nakov), in the same way as they may be asked to act on illegal contents. Instead the first step toward accountability is forcing platforms to be more transparent on their business models (who buys their advertisement space, for what messages, at what time and at what price, etc.) and on their filtering and recommendation algorithms. As long as policy-makers lack precise information on the economic and technical functioning of online platforms, they will not be able to regulate their action effectively.

Journalism as rampart of a healthy public debate

The best antidote against the degradation of public debate and the rise of junk news remains the work of serious investigative journalists. Here again, the advent of social media platforms has been highly consequential, increasingly draining the advertisement revenues of traditional journalism. At the same time, however, digital media reduce the cost of news distribution and therefore allows the creation of a multitude of independent and grassroot news initiative. Local, self-organized, bottom-up reporting initiative, such as the one presented by Joshi, should be cherished by countries which should provide them the support they need but with minimum interference with their freedom and independence.