100 days of teleworking during the COVID-19 pandemic: The Ecuador National Assembly 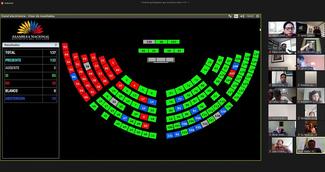 The National Assembly of Ecuador had never interrupted its work before the COVID-19 sanitary emergency. The first power of the State adapted rapidly to the adverse circumstances and immediately put in place solutions. How was this managed? The key was strategic planning aimed at digitalizing the management policy of the legislative that had been undertaken much earlier than when the world faced the pandemic. This will be dealt with in more detail later.

The National Assembly of Ecuador is the first power of the State. Its function is to legislate, oversee and carry out permanent political control as determined in the 2008 Constitution and governed by the Organic Law on the Legislative Function issued in July 2009.

It is composed of 137 members of parliament from 24 provinces of Ecuador, a country with a population of about 17 million inhabitants.

Its main bodies are the Plenary, composed of all members of parliament; the Legislative Administration Council (CAL) composed of seven representatives; and 13 specialized committees composed of 10 assembly members in average. Sessions take place in the Assembly building in Quito, the capital of Ecuador.

When the state of emergency was declared on the national level with the onset of the COVID-19 pandemic, on 19 March 2020 the Legislative Administration Council took the decision to suspend activities in the Assembly building and approved the Rules on Virtual Sessions and Teleworking in its Resolution CAL-2017-2021-213.

The Information and Technology Department (TICs) set to work speedily and with efficiency to evaluate, provide and implement digital applications for the virtual sessions of the Plenary and committees, as well as to implement software tools to enable legislative and administrative teleworking.

The technology of virtual sessions and teleworking

How can members of parliament carry out their work if they cannot be present physically? What system would allow them to participate remotely? These were the main issues that had to be resolved.

Regarding the remote participation of members of parliaments, after a number of trials, it was decided to resort to videoconferencing solutions on the internet (Zoom) which allowed for the identification of participants and audio and video management of virtual sittings. Secretariat staff must authorize access to and register the virtual presence of members of parliament by way of visual identification of each parliamentarian.

In addition, plenary session management also provides remote access through Anydesk to the “Electronic Office System”, which has been in place since 2012, for legislative processing. Biometric authentication was changed to a two-factor user authentication and password.

Once the Electronic Office System was remotely operational, plenary sittings and its various processes could be managed reliably:

Also guaranteed is the continual timely publication of information on plenary sittings on the app for mobile devices. Without doubt, the main challenge was to provide sufficient support to procedural matters.

Given that, at the outbreak of the pandemic, the members of parliament and their staff found themselves outside their National Assembly offices, it was necessary to configure remotely their mobile devices such as PCs, laptops, tablets and smartphones, as well as to provide virtual support. This was done by a group of about a dozen technicians of the Technology and Information Department (TICs).

Parliamentarians are notified beforehand through their institutional email on the convening and access to virtual sittings. The official documents are sent through the document management system DTS 2.0 which requires electronic signatures.

Virtual sittings of the plenary and committees are viewed on Zoom and are supported through broadcasts on digital channels such as Facebook Live, Twitter, and YouTube. In addition, plenary sittings are broadcast live on the legislative radio and TV, as had been the case during face-to-face meetings.

By resorting to virtual sessions and teleworking, the National Assembly of Ecuador continued to carry out its legislative and oversight work as normally as possible. A historic event in this context was the adoption of five acts virtually for the first time in Ecuador’s history.

Challenging legislative work is being carried out in this period as can be seen from the following data:

In terms of the financial implications of virtual sessions, about US$ 180,000 was saved on transport, accommodation and material.

The setting up of virtual sessions cost less than US$ 10,000 and existing platforms and free software applications were also used.

Overcoming the limitations imposed by the COVID-19 pandemic necessitated a technical and operative network relevant to parliaments and was primarily an opportunity to modernize and adapt the digital ecosystem.

Digital transformation depends on the level of engagement in digital development. Digital literacy is fundamental in achieving adequate inclusion of those involved in teleworking.

Electronic signatures facilitate the virtualization of processes and guarantee the legality and security of official documents.

Available information technologies, such as systems of videoconferencing over internet, social networks, and the Cloud, enable an agile implementation of teleworking.

However, the modernization and implementation of avant-garde technology by the National Assembly of Ecuador was undertaken much before the onset of the COVID-19 pandemic. As of 2019 the Assembly placed priority on the strategy to digitalize the legislative and administrative processes thus establishing a channel that prevented the institution from having to interrupt its work. This was in keeping with the will of the President of the Assembly, Mr. Cesar Litardo, who had argued in various forums, the need to digitalize the National Assembly as a step towards an open and transparent parliament accessible to all Ecuadorians.