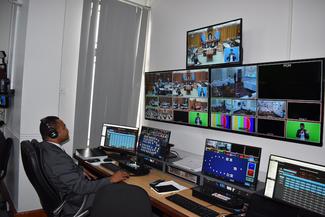 The Parliament of the Republic of Fiji prioritized the safety and welfare of its members and staff whilst maintaining its key functions. It had support from the Speaker and the Business Committee to make the needed changes. In keeping with the public health measures, to ensure the safety of MPs and parliamentary staff, access to the Parliament’s precinct was restricted to the public. Instead, Parliament and committee sittings were broadcasted on the free-to-air channel and livestreamed on Parliament’s Facebook page and website. Additionally, during parliament and committee sittings, parliamentary and committee papers were shared electronically; new catering standards and services were introduced; and to limit staff in the Parliament’s precinct, staff were either rostered on half day shifts or worked from home.

To ensure business continuity, Parliament utilized electronic tools to work remotely. Like the Republic of the Maldives, Fiji used Microsoft Office 365 virtual platforms for its committees to continue to function. It also adopted a hybrid approach with some members present in the committee rooms and some joining remotely. Despite budgetary restraints, in cooperation with the UNDP Pacific office, Parliament took advantage of platforms such as cloud-based apps and of the additional features of Microsoft Office 365, and had the capacity to run up to three committee meetings simultaneously.

Enabling parliamentarians to work remotely was a key feature of the response. They were issued with laptops, smartphones and Wi-Fi access to allow for on-demand viewing and sharing of documents. Senior Committee Clerks were given priority access to internet and IST facilities to ensure they could host and run meetings. Through the Microsoft Teams videoconferencing facility, 77 virtual committee deliberations, 15 virtual public hearings, and 12 hybrid meetings were supported.

Parliament engaged a vendor based in New Zealand to integrate video conferencing in committees and set up “Parliament TV”. Delivery took around three weeks and implementation and installation four days by the resident ICT team using schematic drawing from the vendor. Committee rooms and the Debating Chamber now have Wi-Fi, wired access points, HD cameras, 55‑inch LED screens, and speaker and microphone consoles. Parliament has two control rooms to enable flexible broadcasting from the Chamber and Committee rooms and the broadcasting of issues of public importance.

Parliament also introduced temporary audio solutions in the Chamber to allow for social distancing. It set up additional microphones for MPs seated in the Gallery. These microphones are integrated in the For the Record (FTR) digital recording system.

Parliamentarians responded positively and quickly adapted to the changes with basic training undertaken during the configuration of individual laptops. Looking forward, Parliament would like to optimize the use of its hybrid broadcast platform and explore more cloud-based technologies.