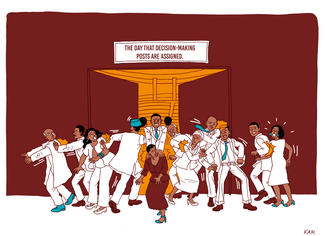 In light of the significance of the recent report, Sexism, harassment and violence against women in parliaments in Africa, the IPU commissioned a talented artist to help visually portray the extent of this scourge in legislatures across the continent.

Annick Kamgang defines herself as an artivist (artist and activist), expressing herself with political cartoons, graphic novels and illustrations. She was born and raised between Central Africa and the French West Indies : during the eighties in Cameroon and the Central African Republic.

In 1991, a revolution occurred in many French-speaking African countries, people fought for more freedom. Annick’s father took part and became an activist after losing his job, because he wrote an article supporting this revolution in Jeune Afrique, a famous Pan-African newspaper. The article was illustrated by Plantu, a famous French political cartoonist. Annick’s father created the UPA (Union of the People of Africa), a pan Africanist political party, and spent the rest of his life defending pan Africanism in Cameroon.

Annick’s work is strongly influenced by her childhood, drawing to express her political opinion, defend democracy, the emancipation of African people and freedom of expression. She illustrates serious and strong subjects with humour, working with pencils, layout paper and a tablet pc.

The scenarios for the cartoons were developed and written by Ms. Géraldine Grenet, IPU Consultant on combatting gender-based violence in politics.