IPU helps to combat discrimination against people affected by leprosy 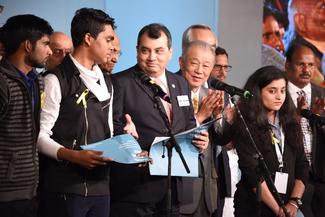 The Global Appeal 2017 to End Stigma and Discrimination against People Affected by Leprosy was launched on 30 January in New Delhi by the Nippon Foundation with IPU’s support. The Appeal, endorsed by the IPU Executive Committee, emphasizes that solutions to the challenges faced by people with leprosy must be "firmly embedded in human rights" and urges all parliaments to "promote and enforce non-discriminatory laws and policies".

Speaking at the launch. IPU President Saber Chowdhury said, "As parliamentarians, one of the principal tools at our disposal is legislation. We constantly review how it can be used to ensure a better life for the people we represent; we also have a responsibility to examine existing laws and amend or repeal any that are discriminatory."

The appeal was started by Yohei Sasakawa, Chairman of The Nippon Foundation, WHO Goodwill Ambassador for Leprosy Elimination, and Japanese Government Goodwill Ambassador for the Human Rights of Persons Affected by Leprosy. An annual appeal has been launched around World Leprosy Day (the last Sunday in January) since 2006. It aims to raise awareness about leprosy among  institutions, policy makers and the general public, emphasizing the fact that the disease is curable and that persons affected by leprosy and their family members need to be treated with the dignity and respect that they deserve.

Nearly 750 MPs worldwide condemned the discrimination and abuse of refugees and migrants at the conclusion of the 138th Inter-Parliamentary Union (IPU) Assembly in Geneva. The Assembly Declaration emphasized the critical role of parliaments in transforming the aspirations of the two Global Compacts – one on migrants and the other on refugees - into national laws.
Read more
Voices

On 6 January 2021, the world watched in horror as a mob waged an outrageous assault on the US Capitol building. Congress was in session, performing the usually calm and orderly ritual of confirming the election results and certifying the
Read more