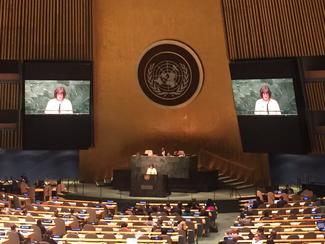 The United Nations is co-hosting its largest in-person gathering since the start of the COVID-19 pandemic, with hundreds of parliamentarians from around the world attending the 2022 Parliamentary Hearing, a joint initiative of the IPU and the President of the General Assembly, on 17 and 18 February.

Around 200 MPs, Speakers, advisers and related officials from 65 Member Parliaments are expected to participate in the two-day event, which is being held in the General Assembly Hall for the first time, on the theme of Building political support and inclusive responses to sustainable recovery.

Every year, the President of the General Assembly and the IPU organize a parliamentary hearing to add the voice of parliamentarians to major UN processes. The hearing also helps to mainstream global commitments into the day-to-day work of national parliaments and support parliaments in their vital role of holding governments to account in implementing multilateral agreements.

Highlighting the shared objectives of the UN and the IPU in the context of multilateralism and global cooperation, the President of the General Assembly, Abdulla Shahid, said: “Parliaments are the platform through which UN resolutions can be turned into national legislation. And national parliaments can be the mechanism through which local concerns can be conveyed to the UN and deliberated by the international community.”

This synergy is particularly importance in global crises, such as the pandemic, or as the world faces global challenges emerging from poverty or climate change.

“This is where parliaments and the UN must be in lockstep,” President Shahid added.

Duarte Pacheco, IPU President, said: “This Parliamentary Hearing is an example of how the United Nations must engage with parliaments and vice-versa for global problems. The COVID-19 pandemic is just the latest instance of a global problem that knows no borders. Climate change. An unstable global economy. The systemic exclusion of women, youth and other groups. There are so many problems we face today that can only be resolved effectively by combining actions nationally and globally – and parliaments are the linchpin for that action.”

This year’s Parliamentary Hearing will drive home to governments, parliaments and the United Nations community a critical perspective on key actions to build economies that work for all, societies that bring people together, and environments that are sustainable for generations to come. The advancement of gender equality will permeate the two-day discussion.

The hearing will also serve as a reflection on the UN Secretary-General’s report on Our Common Agenda, particularly the final chapter on Enhancing global cooperation, which specifically invites a discussion on deepening the role of parliaments and other stakeholders at the UN.

Since 2002, the IPU has had Permanent Observer Status at the UN. In 2004, the General Assembly passed resolution A/RES/59/19 “Cooperation between the United Nations and the Inter-Parliamentary Union” highlighting the parliamentary hearing as a regular feature of its proceedings.